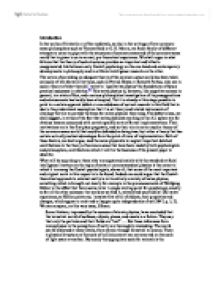 Argue that the theory of common sense structures provides an important and hitherto unappreciated link between early Gestalt psychology on the one hand and contemporary developments in philosophy and in artificial intelligence research on the other.

Introduction In the works of Aristotle or of the medievals, as also in the writings of later common-sense philosophers such as Thomas Reid or G. E. Moore, we find a family of different attempts to come to grips with the structures of common sense and of the common-sense world that is given to us in normal, pre-theoretical experience. We shall argue in what follows that the theory of such structures provides an important and hitherto unappreciated link between early Gestalt psychology on the one hand and contemporary developments in philosophy and in artificial intelligence research on the other. The notion of providing an adequate theory of the common-sense world has been taken seriously of late above all by those, such as Patrick Hayes or Kenneth Forbus, who see in such a theory of what they call `naive' or `qualitative physics' the foundations of future practical successes in robotics.(2) This naive physics is, however, like cognitive science in general, in a state of flux, and a serious philosophical investigation of its presuppositions and achievements has hardly been attempted. Yet it is already at this stage possible to point to a certain apparent defect or one-sidedness of current research in this field that is due to the predominant assumption that it is set theory and related instruments of ontology that are to provide the basis for naive-physical theorizing. The defect arises, we shall suggest, in virtue of the fact that naive physicists working in the A.I. sphere are for obvious reasons concerned with certain specific sorts of formal implementations. Their motivations are in the first place pragmatic, and so their aim is not so much a theory of the common-sense world that could be defended as being true, but rather a theory that has certain sorts of practical advantages from the point of view of implementation. Both of these factors, we shall argue, lead the naive physicists to neglect important detailed contributions to the theory of common sense that have been made by both psychologists and philosophers, contributions which it will be the business of the present paper to describe. ...read more.

In what follows we shall sketch a range of illustrative examples of early contributions to the field of naive physics. These early contributions are unaffected by the predominance of the desire to achieve (`quick and dirty') formal representations: they are contributions to the sophisticated and non-reductionistic theory of common sense, rather than contributions to the computerized representation thereof. On the other hand however these early contributions remain in many cases at the level of isolated insights and much of the work of combining them into a full and adequate theory has still to be done. In our remarks in what follows we shall proceed always in keeping with the spirit of a realistic ontology. Thus we shall take the world of common sense as serving at one and the same time as (1) an object of a sophisticated theory and also (2) as that to which we have ready access in straightforward and non-theoretical everyday experience. For as already Avenarius (in his fashion) saw, naive physics is part of an answer to the question: what do we (straightforwardly) perceive? What, then, are the branches of the theory of the world of straightforward perception? 1. Objects, Natural Units and Natural Kinds The common-sense world is from the formal-ontological perspective first of all a world of things, of stable material bodies that are given to us as things in the sense that they are given as inert, as complete and as three-dimensional. Each thing is present in the flesh, as something which has surfaces and an inside, that is filled with matter. Things are perceived also as manipulable units, and as potential subjects of fragmentation (splitting, cutting) and of unification (gluing, bonding). The articulation of the world of things now follows along natural lines: objects inanimate as well as animate are grouped together according to their typical patterns of behaviour and qualitative determination into natural kinds. ...read more.

These affordances give rise in turn to new motivational connections in light of the interrelations between the various different goals and sub-goals in whose realization we are at any given moment engaged. These values and goals can then be seen as a new dimension of being within the common-sense world itself, a dimension which, we should argue, is crucial to our capacity to find our way around this world in a physical sense. Conclusion As most workers in the field of artificial intelligence have recognized, naive physics is far from being a single, unified discipline. Clusters and sub-clusters of concepts are investigated in a piecemeal way, without much concern for their relation to the whole, in spite of the fact that, as we stressed earlier, this conceptual network is marked by strong holistic features which are reinforced by the pervasiveness of spatial concepts and by the focus on those interactions which are relevant to the concerns of our everyday human behaviour. We have also seen that contemporary representations of common-sense experience in the sphere of naive physics are over-narrow to a degree which has had dramatic consequences for their reliability as representations. We suggested earlier that this narrowness depends on too quick a jump to implementationally attractive features of certain special means of representing naive-physical knowledge, means derived, in effect from the fundamentally atomistic (non-holistic) world of set theory. Against this tendency we wish to stress once more the need for a wider, and deeper, and more painstaking phenomenological investigation of the naive-physical realm and of the associated value-laden dimensions of the world of common-sense experience. The work of the Gestalists and of Gibson, taken together with work in naive physics and in formal ontology in the tradition of the early phenomenologists, has the chance of providing a unifying theoretical framework for the development of a realistic account of the structures here involved, in ways which can, we suggest, be of value also in the construction of more adequate theories of the sort that are still needed by naive physicists in the field of artificial intelligence. ...read more.