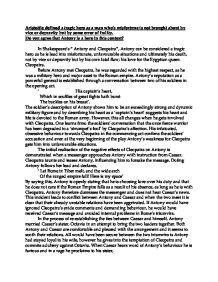 Aristottle defined a tragic hero as a man who's misfortune is not brought about by vice or depravity but by some error of frality.Do you agree that Antony is a hero in this context?

Aristottle defined a tragic hero as a man who's misfortune is not brought about by vice or depravity but by some error of frality. Do you agree that Antony is a hero in this context? In Shakespeare's " Antony and Cleopatra", Antony can be considered a tragic hero as he is lead into misfortunate, unfavourable situations and ultimately his death, not by vice or depravity but by his own fatal flaw; his love for the Eygptian queen Cleopatra. Before Antony met Cleopatra, he was regarded with the highest respect, as he was a military hero and major asset to the Roman empire. Antony's reputation as a powerful general is established through a conversation between two of his soldiers in the opening act. ' His captain's heart, Which in scuffles of great fights hath burst The buckles on his breast'. The soldier's description of Antony shows him to be an exceedingly strong and dynamic military figure and by describing his heart as a 'captain's heart' suggests his heart and life is devoted to the Roman army. ...read more.

Antony therefore dismisses the messenger and does not hear Caesar's news. This incident leads to conflict between Antony and Caesar and when the two meet it is clear that their already unstable relations have been aggrivated. If Antony would have ignored Cleopatra's snide comments and demanding behaviour, he would have received Caesar's message and avoided internal problems in Rome's triumvirs. In the process of re-establishing the ties between Caesar and himself, Antony married Caesar's sister, Octavia in an attempt to bring the two leaders together. Both Antony and Caesar are comfortable and pleased with the arrangement and it seems to sooth their relations. All would have been secure between the two triumvirs is Antony had stayed loyal to his wife, however he gives into the temptation of Cleopatra and commits adultery against Octavia. When Caesar hears word of Antony's behaviour he is furious and in a rage he proclaims to his sister, ' You are abused Beyond the mark of thought, and the high gods, To do you justice'. ...read more.

Do't; the time is come'. In reflecting on the disrespect he has gained through his vain attack on his own empire, Antony feels that the only way of getting back any of his respect and dignity would be to kill himself. If Antony had not let his flaw rule him and if he would have fought instead of run after Cleopatra, he would have most likely have been successful. However, he gave in to his weakness and in giving in to his weakness, he practically assigns his own death. Antony can therefore be defined as a 'tragic hero' his death is caused by his fatal flaw; his love for Cleopatra. If Antony had stayed true to his ' captain's heart' he would have avoided conflict with Caesar and would have been a successful general. Although the extent of his heroism is controversial, as in situations such as his reluctance to kill himself he is shown to be of weak nature, his role as a military hero is underminded and ultimately ended by consequences triggered off by his weakness of choosing love over duty. ...read more.