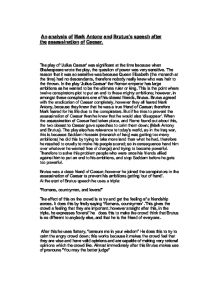 As previously said, Brutus was a close friend of Caesars; however he joined the conspirators in the assassination of Caesar to prevent his ambitions getting 'out of hand'

An analysis of Mark Antony and Brutus's speech after the assassination of Caesar. The play of 'Julius Caesar' was significant at the time because when Shakespeare wrote the play, the question of power was very sensitive. The reason that it was so sensitive was because Queen Elizabeth (the monarch at the time) had no descendants, therefore nobody really knew who was heir to the thrown. In the play 'Julius Caesar' the Roman emperor has large ambitions as he wanted to be the ultimate ruler or king. This is the point where twelve conspirators plot to put an end to these mighty ambitions; however, in amongst these conspirators one of his closest friends, Brutus. Brutus agreed with the eradication of Caesar completely, however they all feared Mark Antony, because they knew that he was a true friend of Caesar; therefore Mark feared for his life due to the conspirators. But if he tries to prevent the assassination of Caesar then he knew that he would also 'disappear'. When the assassination of Caesar had taken place, and Rome found out about this, the two closest to Caesar gave speeches to calm them down; (Mark Antony and Brutus). ...read more.

He uses this to make his main theme of "Caesar's ambition" stand out in the speech, because this was Brutus's main accusation against Julius Caesar. However he constantly refers to Brutus being an "Honourable man" This is repeated to suggest the respect that he has for Brutus although he doesn't agree. Also it is said in a sarcastic way to subtly hint out that he doesn't agree with the assassination of Caesar. Then after this, to hit out again that Caesar was a good man Antony says the words 'friend', 'faithful' and 'just'. He says this about Caesar to subtly express that Caesar's assassination was wrong "Brutus is an honourable man" He also repeats this and this although flattering Brutus it is at the same time ridiculing him because he is over flattering him. To make the crowd think at the same time as listening to what he has to say, Mark uses rhetorical questions: "What cause withholds you then, to mourn for him?" By saying this, using subtle and simple words, it gives the effect that Antony is demanding for the crowd to mourn for Caesar. ...read more.

are rhetorical questions, this is to always keep the crowd alerts and agreeing with what he says, and repetition, this is to keep reinforcing what he wants to mostly express. However overall it was Mark Antony who won the crowd over. In my opinion the reason that he won was because as the speech is longer, more detail of true account can be told, the way that Antony gets his points across is by firstly saying why he acted the way he did, but then he explains the way that it benefits Rome. Also Mark uses one of the most powerful techniques right at the end of emotive language immediately after words that he knew would stir the crowd. Whereas Brutus uses noting, but in my opinion if Brutus used a rhetorical question at the end which summarised all of his speech then I believe that the crowd may have swayed towards Brutus's direction. I believe that a key method Antony uses throughout his speech is euphony, this is because it will make the crowd want to listen to more because not only is he speaking of words that they wont to hear, but it sounds good at the same time. By James Perry ...read more.