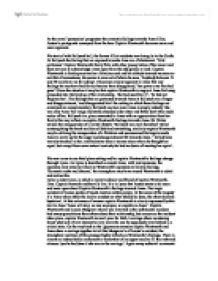 As the novel 'persuasion' progresses the romantic feelings towards Anne Elliot, Austen's protagonist conveyed from the hero Captain Wentworth becomes more and more apparent. We start of with Kellynch hall, the former Elliot residents now being let to the Crofts. At Kellynch the feeling that are exposed towards Anne are of disinterest. 'Cold politeness' Captain Wentworth freely flirts with other young ladies of the manor and does not care to acknowledge Anne apart from the odd glance or look. Captain Wentworth is firstly perceived as a frivolous soul and his attitude towards women are not that of earnestness. He seems to care not of whom he sees, 'Anybody between 15 and 30 may have me for asking'. It becomes almost apparent to Anne that any feelings he may have had for our heroine have disappeared, 'her power over him had gone' Given the situation it may be that captain Wentworth is angry at Anne for being persuaded into the beak up of the relationship, 'she had used him ill', 'he had not forgiven her'. The feelings that are portrayed towards Anne at Kellynch are of anger and disappointment, 'and disappointed him' the setting in which these feelings are conveyed are complementary, Kellynch as place were Anne is simply nobody 'she was only Anne' her image and status obsessed elder sister and father don't take much notice of her. ...read more.

On the way back to the Uppercross mansion captain Wentworth and Anne share a carriage together to tell the Musgrove's of Louisa's accident, the atmosphere and tone of this passage highly reflects on Wentworth's feelings. There is almost an indescribable excitement or somewhat of an urgent need to fill the awkward silences 'yes he had done it she was in the carriage'. Again many authorial comments made by Austen suggest that Wentworth is not entirely sure about his relationship with Louisa. There is another aspect of the novel in which captain Wentworth compares the character of a woman to a hazelnut. The nut is metaphorical of how he feels towards Anne and what irritates him in women, this comparison is clearly aimed at Anne as it is Anne whom was persuaded into braking of the relationship 'beautiful glossy nut, blessed with original strength has outlived all the storms of autumn not a puncture or weak spot anywhere'. The party which had done to lyme on an occasion gone down to the cob for a walk, it is at this point in which Mr William Elliot, heir to the kellynch estate appears and notices Anne, 'Anne's face caught his eye, he looked at her with a degree of earnest admiration' , after this incident it is apparent that captain Wentworth sees again in Anne ...read more.