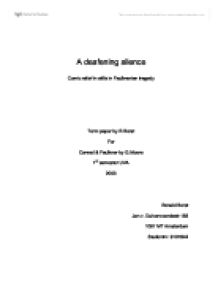 As the number zero was the start of mathematics and the vacuum the foundation of physics.

A deafening silence Comic relief in stills in Faulknerian tragedy Term paper by R.Borst For Conrad & Faulkner by G.Moore 1st semester UVA 2003 Ronald Borst Jan v. Duivenvoordestr.183 1067 MT Amsterdam Studentnr. 9187944 Introduction As the number zero was the start of mathematics and the vacuum the foundation of physics, so silence became the standard measure of civilization. Yet, all three of these 'scientific' standards spring from human imagination and are only applicable by general agreement, but remain in principle fictional. Few compositions have caused such a division of opinion as John Cage's '4.33' from 1952, one of his own favourites. A well-dressed pianist entered the stage, sat down behind the grand piano, opened it, turned a page of the score in front of him every now and then and after about four and a half minutes he got up, made a bow and left the stage. Cage got the idea for this composition after a visit to a soundproof room and only wanted to show there is no such thing as absolute silence. This manifests itself on a recording of the piece that still exists. In it, a world of small tiny sounds opens up. Chairs squeak, uncomfortable coughing, the humming of the air-conditioning, some far-away sounds of traffic, the rustling of the pages of a program. Above all one can hear, just like the original audience back in 1952, the rushing of one's own blood in one's ears, one's heartbeat, swallowing and rumbling stomach. Through this, the audience becomes the performing artist of '4.33', and because one goes to a concert to listen, the uproarious silence had never been heard as well as just there. Does silence exist at all, one wonders, or is it like a hole in the ground, only observed because of the earth that surrounds it? After all silence is an arbitrary name for the absence of sound. ...read more.

Hightower's story begins in the third and ends in the next-to-last. These three stories do not proceed chronologically but are felt, by most readers, to fuse into one unified novel. Some readers have argued that the novel's unity comes from other elements than the structure; thematically the main characters embody such themes as racism, the heritage of the past, Christianity, community, male-female relations and personal identity. With the addition of Joanna Burden and Byron Bunch, the five central characters encompass subsidiary themes as the contrasting attitudes of the different characters to time, the issue of man and nature (as in Go Down, Moses) and fate and martyrdom. Others say that the coincidence of them all being in the same town between the two climactic events of Joanna Burden's murder and Joe Christmas's death provides enough unity, though their tales are separate and distinct. Still others argue that Faulkner's stream of life presentation would have suffered under a less loose and open construction. By contrast, to Lena, Joe Christmas does not know who he is; his uncertain racial identity affects every aspect of his life. When the 'uncertain' trace of black ancestry, for he is also called 'the mulatto' (Cowley, 51), is known, it provokes very different responses. Yet, his claim that he belongs to the black race is ambivalent since he uses it to rebel against both black and white. He roams the country, like Lena, but without purpose, never settling or entering a long-lasting human relationship. His fate seems to inevitably push his life's story to an inescapable and violent death. The reverend Gail Hightower, the preacher who is punished for not conforming to his congregation's idea of practicing religion and because he was unable to keep his wife from behaving sinfully, seems rooted in the past, obsessed with the heroic past of his forebears. His story ends when he realizes that his detachment from life does not prevent him from being concerned with the events of the present. ...read more.

Afterthoughts I think it was Bouwe Postmus3 who once said that one should never write about a work or an author one admires. I now see his point but it can not be avoided when one is just introduced to such a writer in the course of a term. Even by confining myself to what I thought to be a limited subject as comic-relief by means of the audio-visual modes of silence and still, the amount of perspectives is incredible. The shifting point of view and the distance and detachment with which the human enterprise is seen provides a response that transcends the individual's tragic encounter with the reality about him. I think I have shown that the mix of comical and tragical tones gives Faulkner's work an extra dimension by which life's duality is truly represented. Faulkner's use of style figures, like an oxymoron, helps to deepen the contradictory human aspects that are present in his characters. One cannot be forced to see the portrayed events in this paper in the same way that I do. It does not prevent them from being seen for what they are: images that give a defeaning sound in the surrounding silence. Works Cited Bentley, Eric. Life of the Drama. New York: Atheneum, 1964. Brown, Leslie ed. The New Shorter Oxford English Dictionary. Oxford: Clarendon Press, 1993. Camthout van, Martijn. Een oorverdovend niets. De Volkskrant, 21 dec. 2002 Faulkner, William. Go Down, Moses. New York: Vintage International, 1990. Faulkner, William. Light In August. New York: Vintage International, 1990. Faulkner, William. As I Lay Dying. New York: Vintage International, 1990. Howe, Irving. William Faulkner: A Critical Study. New York, Random House, 1952. Schelle, David. On Light In August for a class at Hotchkiss High. 27-01-2003. http://www.hotchkiss.k12.co.us/HHS/nobelnov/faulkner.htm 1 In this form, one of the principal sources of comedy is mime, which comes close to what I describe as the silent mode, but mime also acts out emotions, mostly by studied facial expressions, which plays a role in this story as well. ...read more.