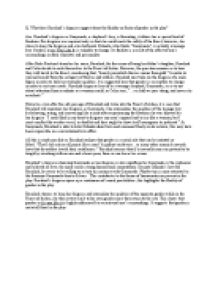 &quot;As you like it&quot;. What does Rosalinds disguise suggest about the fluidity or fixity of gender in the play?

﻿Q. What does Rosalind?s disguise suggest about the fluidity or fixity of gender in the play? Ans. Rosalind?s disguise as Ganymede, a shepherd?s boy, is liberating; it allows her a special kind of freedom. Her disguise was required only so that she could reach the safety of the forest, however, she chose to keep the disguise and even befriends Orlando, who thinks ?Ganymede?, is actually a teenage boy. Gender, in As You Like It, is culpable to change. Its fluidity is a result of the effect of one?s surroundings on their character and personality. After Duke Frederick banishes his niece, Rosalind, for the crime of being her father?s daughter, Rosalind and Celia decide to exile themselves to the Forest of Arden. ...read more.

we pass along, and never stir assailants.? However, even after the safe passage of Rosalind and Celia into the Forest of Arden, it is seen that Rosalind still maintains her disguise as Ganymede. She internalizes the qualities of the teenage boy by behaving, acting, and conversing like a male after experiencing the freedom she was allowed by her disguise. ?I could find in my heart to disgrace my man?s apparel and to cry like a woman; but I must comfort the weaker vessel, as doublet and hose ought to show itself courageous to petticoat.? As Ganymede, Rosalind is able to tutor Orlando about love and comment freely on his actions; this may have been impossible in a conventional love affair. ...read more.

Rosalind?s choice in choosing Ganymede as her disguise is also significant as Ganymede is the cupbearer and beloved of Jove; the name carries strong h********l connotations. Despite Orlando?s love for Rosalind, he seems to be willing to act out his romance with Ganymede. Phoebe too is more attracted to the feminine Ganymede than to Silvius. This contributes to the theme of homoeroticism present in the play. Rosalind?s disguise opens up a continuum of s****l possibilities; this highlights the fluidity of gender in the play. Rosalind chooses to keep her disguise and internalize the qualities of the opposite gender while in the Forest of Arden; she then reverts back to her own gender once they return to the city. This shows that gender in As you like it is highly influenced by society and one?s surroundings. It suggests that gender is not at all fixed in the play. ...read more.