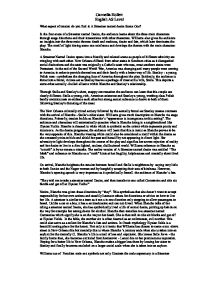 What aspect of tension do you find in A Streetcar named desire Scene One? In the first scene of a Streetcar named Desire, the audience learns about the three main characters through stage directions and their interactions with other characters. Williams also gives his audience an insights into the three main themes: death and madness, desire and fate, which later dominates the play: The motif of light during scene one reinforces and develops the themes with the main character: Blanche. A Streetcar Named Desire opens into a friendly and relaxed scene as people of different ethnicity are mingling with each other. New Orleans differed from other states in Southern cities as it disregarded social distinctions and the state was originally a Catholic state whereas, most southern states were Protestant. At the end of the Second World War, America was changing and many people were coming to America in order to provide themselves and their family with a better way of life. Stanley - a young Polish man - symbolises the changing face of America throughout the play. Suddenly, the audience is thrust into a brutal, vicious set as Stanley heaves a package of meat at his wife, Stella. This depicts a some-what s******y -fuelled alliance within Blanche and Stanley's relationship. Through Stella and Stanley's short, snappy conversation the audience can learn that this couple are clearly different. ...read more.

Although not lengthy, the audience learns a lot about Blanche's and Stella's relationship during scene one. Blanche is the typical "bossy big sister" and although Stella is an adult, Blanche still patronises her. Interestingly, during scene one Blanche refers to Stella as "a precious lamb" and "a cherub". This is overtly symbolic in the way that Blanche still sees her younger sister: pure and innocent. Blanche's choice of language used to describe her sister also contrasts with her own past and current lifestyle. Blanche controls the conversation between her and Stella during scene one therefore, we do not learn a great deal about Stella's character other than she is submissive toward Blanche (she turns the light off for Blanche and stands at her command). The audience soon learns that Blanche craves constant appraisal and compliments from people in regards to her looks this is a pathos as Blanche fears becoming old and loosing her looks. This may also be another reason why she dislikes and tries to avoids being seen in direct light. Blanche's derogatory comments and neurotic state build upon the current tension and make her and Stella's conversation very uncomfortable. Blanche's reference to Stanley as a "Polack" builds on the racial boundaries she established earlier on in the play. When Blanche tells Stella she has brought clothes to see all her "lovely" friends in, Stella tells Blanche that they're not "her" friends but, Stanley's friends. ...read more.

The encounter of the world of Blanche DuBois and Stanley Kowalski in scene one is just a prelude to the intensified conflicts and tensions they later deal with. Consequently, I believe there are various aspects of tension in the opening scene of A Streetcar Named Desire. Cleverly, Williams initially introduces these tensions as they contribute to the main themes of the play. The s****l tensions, social class division and clashes of personality are all factors in how people are treated during the course of the play. The s****l tensions and passions between Stella and Stanley soon cloud Stella's judgement of what Stanley is really like. The social class divisions Blanche creates also builds an arrogant and ignorant air about her to the extent that Stanley intends to mentally ruin Blanche. The imbalance of each character's personalities and traits finally lead to their fate. Stella's disbelief of Blanche due to her passionate love for Stanley leads to the loss of her sister to a mental hospital. Blanche's previous immoral reputation mixed with her own insecurities finally have placed into a mental asylum and therefore expelled from society . Lastly, Stanley a working-class Polish immigrant has nothing to loose from the start of the play and throughout the course of the play Stanley's indeed looses nothing. Instead, he gains self-confidence and self-reassurance and a child through expressing his male dominancy, s******y, with both Stella and Blanche. ?? ?? ?? ?? Carmella Hollett English AS Level ...read more.