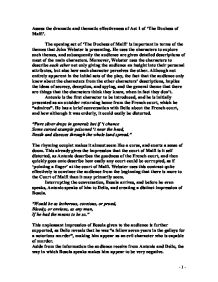 Assess the dramatic and thematic effectiveness of Act 1 of 'The Duchess of Malfi'.

Assess the dramatic and thematic effectiveness of Act 1 of 'The Duchess of Malfi'. The opening act of 'The Duchess of Malfi' is important in terms of the themes that John Webster is presenting. He uses the characters to explore such themes, and subsequently the audience are given detailed descriptions of most of the main characters. Moreover, Webster uses the characters to describe each other not only giving the audience an insight into their personal attributes, but also how each character perceives the other. Although not entirely apparent in the initial acts of the play, the fact that the audience only know about the characters from the other characters' descriptions, implies the ideas of secrecy, deception, and spying, and the general theme that there are things that the characters think they know, when in fact they don't. Antonio is the first character to be introduced, and he is initially presented as an outsider returning home from the French court, which he "admires". He has a brief conversation with Delio about the French court, and how although it was orderly, it could easily be distorted. ...read more.

Aside from the information the audience receive from Antonio and Delio, the way in which Bosola speaks makes him appear to be very negative. "He and his brother are like plum trees that grow crooked over standing pools; they are rich and o'erladen with fruit, but none but crows, pies, and caterpillars feed on them." The constant use of dark and distasteful imagery attributes him to be quite bitter, and so completes the overall impression that he is indeed an unpleasant character. However, as Bosola leaves, Antonio says he has heard good things about Bosola, but his "railing at those things which he wants" overcomes these positive aspects. "'Tis great pity He should be thus neglected; I have heard He's very valiant. This foul melancholy Will poison all his goodness." This indicates to the audience that Bosola may have a good side which he may or may not reveal later. Either way, this is another way in which Webster explores the theme of first impressions not being all that they seem. As Ferdinand and the Cardinal are introduced, their personal qualities aren't so apparent at first, as the audience can only judge them from what they can see. ...read more.

"I cannot stand upright in 't, nor discourse, Without I raise it higher. Raise yourself, Or, if you please, my hand to help you: so." In this instance, the Duchess is helping Antonio, and effectively raising his status to her level, so that he feels comfortable with their pending marriage, even though others don't approve due to his low social status. The fact that Webster explores the idea of gender inequality in such a manner was unusual for his time, and almost ironic considering this was a time when only men were allowed to act on stage. This introductory act, although quite short, is still essential in terms of the entire structure of the play, and how the themes are presented. As well as all the themes of deceit, spying, social inequality, and gender inequality, being presented to the audience, the way in which some of the characters' personalities are dictated to the audience also implies that there is more to each character than these first impressions. This is likely the most fundamental element of the play, and thus gives the audience to figure out what really lies behind each character as the play unfolds. - 1 - ...read more.