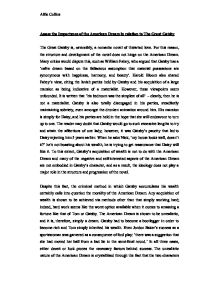 Assess the Importance of the American Dream in relation to The Great Gatsby The Great Gatsby is, ostensibly, a romantic novel of thwarted love. For this reason, the structure and development of the novel does not hinge on the American Dream. Many critics would dispute this, such as William Fahey, who argued that Gatsby has a 'na�ve dream based on the fallacious assumption that material possessions are synonymous with happiness, harmony, and beauty'. Harold Bloom also shared Fahey's view, citing the lavish parties held by Gatsby and his acquisition of a large mansion as being indicative of a materialist. However, these viewpoints seem unfounded. It is written that 'his bedroom was the simplest of all' - clearly, then he is not a materialist. Gatsby is also totally disengaged in his parties, steadfastly maintaining sobriety, even amongst the drunken animation around him. His mansion is simply for Daisy, and his parties are held in the hope that she will endeavour to turn up to one. The reader may doubt that Gatsby would go to such excessive lengths to try and attain the affections of one lady; however, it was Gatsby's paucity that led to Daisy rejecting him 5 years earlier. ...read more.

For this reason, the theme of the American Dream has the importance of providing a moral critique of 1920s America. Fitzgerald is presenting the American Dream as a search for an ideal that can never be achieved. This idea is symbolised through Gatsby's regard for Daisy as a person of idealised perfection. Gatsby's dream is ruined by the unworthiness of its object, just as the American dream is ruined by its objective of money and hedonic pleasure. The idea that Daisy is to Gatsby as wealth is to the American Dream is summed up in Gatsby's remark that 'her voice is full of money'. For this reason, the American Dream acts as a tone throughout the novel: it compliments the novel's fabric without influencing its direction. The American Dream, however, must not be analysed simply with respect to Gatsby; the society as a whole that Fitzgerald presents is affected by the desires of wealth and pleasure. This is shown through the parallel between the American Dream and the idea of the Jazz Age. The reckless parties housed by Gatsby are reckless due to the frivolity which the era celebrated. ...read more.

Showing these two contrasts of rich and poor in close proximity to each other, is an indication that the benefits of the American Dream are only experienced by a few. This contrast is again alluded to when Tom deridingly asks Wilson 'like to buy it?' (in reference to his car), and Wilson comments, 'Big chance... but I could make some money on the other.' Here, importance of the American Dream in relation to the novel is shown by the fact that it will never benefit everyone, and that this will result in economic and class divide. To conclude, whilst the American Dream has no effect on the novel's development, it is still important in that it offers a social critique within the novel, and also because it highlights how unrealistic the ideals within the dream are. There is, however, an underlying feeling that Fitzgerald is not casting blame on the individuals within the era, but is actually presenting people as less Epicurean than the epoch suggests. He is highlighting a crisis of identity brought about by the war; the American Dream is really about finding fulfilment, and about individualism. This is why the American Dream is important within the novel, because it highlights the human desire for meaning and purpose. Alfie Collins ...read more.