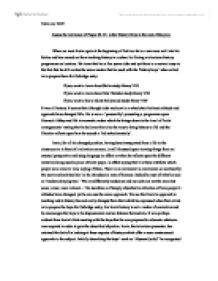 Assess the relevance of Pages 58 -63 in the History Boys to the rest of the play. When we meet Irwin again at the beginning of Act two he is a man now well into his forties and has moved on from teaching history in a school to filming a television history programme on location. We learn that he is five years older and yet there is a certain irony in the fact that he still recites the same mantra that he used with the 'history boys' when called in to prepare them for Oxbridge entry If you want to learn about Stalin study Henry VIII. If you want to learn about Mrs Thatcher study Henry VIII If you want to know about Hollywood study Henry VIII' It was all history. It seems that although older and now in a wheelchair his basic attitude and approach have changed little. ...read more.

Irwin, the television presenter, has retained this belief in looking at these aspects of history which offer a more controversial approach to the subject. Initially describing the boys' work as 'Abysmally dull' he recognised to be successful they had to attract attention by using unorthodox methods. His dictum, which was evident as a teacher, was evident when he said, 'The wrong end of the stick is the right one. A question has a front door and a back door. Go in the back or better still the side.' To shock or surprise was his intent. He then proceeded to express his opinion that history was a performance, For Irwin, unlike Hector, presentation was everything and he has interest in moral truth viewing things as being entertainment, so the first glimpse of Irwin the television presenter was evident even as a teacher. When referring to Stalin, whilst agreeing that he was a monster, he was still perfectly willing to say something in his defence. ...read more.

It is now just the case that his horizons are greatly expanded and he is able to suppress any moral feelings. He has obviously reached a stage where he is happy to twist debatable aspects to fit in with what he wishes to achieve. His views are well illustrated when he says in defence of a law change, 'Paradox works well and mists up the windows which is handy' We then come to appreciate how Irwin the television presenter views what he does by saying, 'School. That's all it is. In my case anyway. Back to school.' He really had come to believe that history was 'a performance. Its entertainment. And if it isn't make it so.' Perhaps this last statement is so telling of his willingness to subvert the facts and in so doing taking an argument and endeavouring to prove its opposite as he had first done as a teacher who was willing to relegate moral truth for effect. ?? ?? ?? ?? February 2009 ...read more.