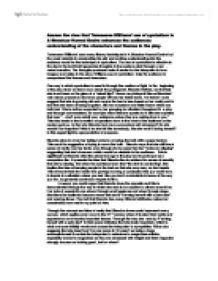 Assess the view that Tennessee Williams use of symbolism in A Streetcar Named Desire enhances the audiences understanding of the characters and themes in the play.

Assess the view that Tennessee Williams' use of symbolism in A Streetcar Named Desire enhances the audiences understanding of the characters and themes in the play. Tennessee Williams' uses many literary techniques in A Streetcar Named Desire but the most valuable in constructing the plot and evoking understanding into the audience would be the technique of symbolism. The use of symbolism is effective in the due to the fact that it generates thoughts in the readers mind through a non-verbal narrative. The thoughts produced make it easier for the interpreter to form imagery and relate to the story. Williams use of symbolism help the audience to comprehend the themes and characters. One way in which symbolism is used is through the medium of light. In the beginning of the play when we learn more about the protagonist, Blanche DeBois, we find that she is not keen on the glare of a "naked light". Some may interpret this as Blanches' vain nature present as she fears people will see her faded looks. Her faded looks suggest that she is growing old and maybe the fear is less based on her vanity and in fact that she fears of being forgotten, like her ancestors and Belle Reeve which are both lost. This is further supported by her grasping for attention throughout the play and through conversations, for example when Blanche speaks to Stella she explains that men "...don't even admit your existence unless they are making love to you." ...read more.

Her struggle to keep this part of her alive is made apparent when she states on her birthday that Stanley's "commonness isn't necessary" when Stanley throws food, showing that she is still trying to uphold manners and common curtsy which is lacking. If Blanche is representative of the old America, then Stanley's representative of the new line of industrial labourers. In this sense Stanley is symbolic of the new. He believes that he is equal to Blanche in terms of status, perhaps even greater due to the fact that he is referred to as the "new heterogeneous" worker, who work to achieve everything they possesses. He states that he is "one hundred per cent American ... And proud of it". His suggests that his behaviour is due to the fact that he believes that he is representative of the real America whereas Blanches' representation offends him as it disregards meritocracy, which leads him into saying "everyman is a king". This could be to further elaborate the difference between him and Blanche as she views herself as royalty but Stanley is actually the king of the house. Williams' presented the theme of fantasy versus reality into the play. This is hugely significant as we see Blanche going mental and drowning herself in her lies and fantasies to a point where she's lost control of her mind. It is obvious that Blanche prefers her fantasies and lies as she mentions "I don't want realism, I want magic", which could be her pursuit of chivalric hero, which she can't seem to find. ...read more.

Blanche also mentions that the polka music ends after the gunshot which refers to the death of her husband at the end of the dance. Williams' has used the polka music to resemble any point in the play when Blanche is affected by the death of her husband. The fact that she hears it often indicates that she is haunted by her past. The poker game is largely significant as it takes place during the beginning of the play and at the end of the play. In the first poker game we see that Stanley is losing "when I'm losing you want to eat?" this symbolises the arrival of Blanche and the hard times coming into the household. During the second game Stanley experiences good luck in the game but could resemble the fact that Blanche's leaving and he's getting what he wants. Poker is cleverly incorporated since it is a game of bluff and at the end it seems top the audience that Blanche has run out of cards - lies to tell. The symbolism used by Williams brings more emotion into the play but also bring greater meaning to the characters' actions and to their emotions. Over all it is safe to conclude that the characters that Williams has constructed are complex even though the audiences are given indications to the core of them. The audience are left to decide how to categories the characters in genres of good and bad which is important since everyone has good and bad qualities. There are probably more hidden uses of symbolism in the play which aren't apparent as the ones explored in this essay. ...read more.