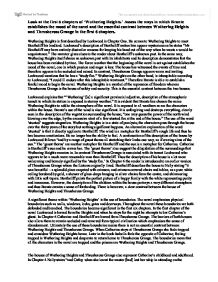 Assess the ways in which Bronte establishes the mood of the novel and the essential contrast between Wuthering Heights and Thrushcross Grange in the first 6 chapters.

Look at the first 6 chapters of 'Wuthering Heights.' Assess the ways in which Bronte establishes the mood of the novel and the essential contrast between Wuthering Heights and Thrushcross Grange in the first 6 chapters. Wuthering Heights is first described by Lockwood in Chapter One. He comes to Wuthering Heights to meet Heathcliff his landlord. Lockwood's description of Heathcliff makes him appear mysterious as he states "Mr Heathcliff may have entirely dissimilar reasons for keeping his hand out of the way when he meets a would-be acquaintance." The narrator gives clues to the reader about Heathcliff's unknown past. In the same way, Wuthering Heights itself shares an unknown past with its inhabitants and its description demonstrates that the house has been ravished by time. The fierce weather that the beginning of the novel is set against establishes the mood of the novel; one in which passion and anger is key. The house has witnessed the events of time and therefore appears to be secluded and ruined. In contrast, Thrushcross Grange appears warm and inviting. Lockwood mentions that he has a "study fire." Wuthering Heights on the other hand, is inhospitable according to Lockwood; "I could ill endure after this inhospitable treatment." ...read more.

Thus the description of his house is a lot more welcoming and homely signified by the 'study fire.' In Chapter 6 the reader is introduced to an earlier version of Thrushcross Grange where the Lintons originally lived. Heathcliff describes the house to Nelly stating "it was beautiful - a splendid place carpeted with crimson, and crimson covered chairs and tables, as a pure white ceiling bordered by gold, a shower of glass-drops hanging in silver chains from the centre, and shimmering with little soft tapers. Heathcliff paints the perfect picture of a happy family with the white representing purity and innocence. However, the description of the children within the house portrays a very different atmosphere and thus Bronte creates a sense of foreboding. There is however, a clear contrast between the house of Wuthering Heights and Thrushcross Grange. A significant theme within 'Wuthering Heights' is the use of boundaries. The novel emphasises physical boundaries such as walls, windows, locks, gates and doorways. Throughout the novel these boundaries are both defended and breached. The boundaries become significant in the first six chapters. In the first chapter of the novel Lockwood is barred from the Heights and when he stays for the night he attempts to bar Catherine's ghost. ...read more.