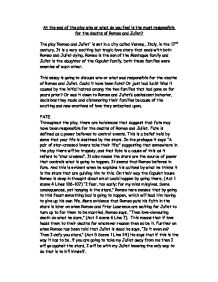 At the end of the play who or what do you feel is the most responsible for the deaths of Romeo and Juliet?

At the end of the play who or what do you feel is the most responsible for the deaths of Romeo and Juliet? The play 'Romeo and Juliet'' is set in a city called Verona, Italy, in the 17th century. It is a very exciting but tragic love story that ends with both Romeo and Juliet dying. Romeo is the son of the Montague family and Juliet is the daughter of the Capulet family, both these families were enemies of each other. This essay is going to discuss who or what was responsible for the deaths of Romeo and Juliet. Could it have been fate? Or just bad luck? Was it caused by the initial hatred among the two families that had gone on for years prior? Or was it down to Romeo and Juliet's adolescent behavior, decisions they made and dishonoring their families because of the exciting and new emotions of love they embarked upon. FATE Throughout the play, there are incidences that suggest that fate may have been responsible for the deaths of Romeo and Juliet. Fate is defined as a power believed to control events. This is a belief held by some that your life is destined by the stars. In the prologue it says ''A pair of star-crossed lovers take their life;" suggesting that somewhere in the play there will be tragedy, and that fate is a cause of this as it refers to ''star crossed''. It also means the stars are the source of power that controls what is going to happen. It seems that Romeo believes in fate. And this is evident when he explains his actions by what he thinks it is the stars that are guiding him to this. On their way the Capulet house Romeo is deep in thought about what could happen by going there, (Act 1 scene 4 Lines 106-107) "I fear, too early; for my mind misgives. ...read more.

At this point you would think that because of their family backgrounds they should ignore what has just happened and go their separate ways, but they don't! Although Romeo and Juliet initially deal with this news in different ways in the end they both make the decision to continue to see each other. When Juliet finds out who he is she goes to her room thinks about her feelings for Romeo. Her frustration and confusion as to why he has to be a Montague, and the fact that he is means they can not be lovers and that if they were then she would be turning her back on her family (Act 2 scene 2). Again here you would think that the right thing to do is walk away and forget about Romeo but then she questions what is a someone's name, what importance does it have? If he were not called Romeo, if he were not a Montague then he would still be the perfect man that she met that night. When Romeo finds out that Juliet is a Capulet, instead of walking away he puts his life in the hands of the enemy. He is clearly aware that he is putting himself in danger when he says "o dear account, my life is my foes dept" (Act 1 Scene 5, line 17). Romeo instead of leaving to return home turns and goes round to the Capulet house, (Act 2 Scene 2). By these actions, you could say that he is being foolish. He knows nothing good can come of this and although it is Romeo that makes the first decision to act on his feelings Juliet does not resist. Their Loyalties should lie with their families but by making the decision to pursue a relationship; their families obviously do not mean that much to both Romeo and Juliet as they do with the rest. ...read more.

And this may have meant they died unhappily, at least this way they shared what few moments in love they had together. However it does not suggest that all the decisions made to get to where you are destined to go are down to the stars. Sometimes it is just the luck of the draw if something goes your way, it's a coincidence! I believe a lot of the time what happens is down to the decisions you make, it is your choice made from your own judgment on the situation at that time. Romeo and Juliet made decisions based on what they believe to be true to them. Can you call someone a murderer for that? A lot of what they did and why they did it was because of the hatred among the two families, Montague and Capulet. If the fathers could have not been so proud, if a 'ancient grudge' could have been resolved earlier, if the attitude of love was more important than dishonoring their families then Romeo and Juliet may have felt they could have declared their love for one another before it was too late. I agree with Romeo 'if it was meant to be then it will be' but I feel there is no way we can possibly say that it is fate that is responsible for their deaths, nor is their any way we can change coincidence, there is no way of proving this. Although a lot of the coincidences that happened were unfortunate, at the end of the play, (Act 5 Scene 3) both Capulet and Montague realise that it was their feud which has led to the tragedy and agree to abandon all hostility. Even though I believe it was a combination of reasons, I agree with this the most. Romeo and Juliet By William Shakespeare At the end of the play who or what do you feel is the most responsible for the deaths of Romeo and Juliet English Coursework By Mira Kudiarskyj 21st/11/2004 ...read more.