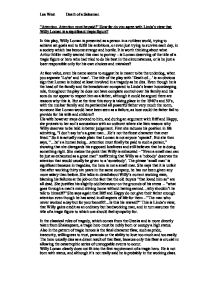 Attention. Attention must be paid! How far do you agree with Lindas view that w***y Loman is a significant tragic figure?

"Attention. Attention must be paid!" How far do you agree with Linda's view that w***y Loman is a significant tragic figure? In this play, w***y Loman is presented as a person in a ruthless world, trying to achieve set goals and to fulfil his ambitions, or even just trying to survive each day, in a society which has become strange and hostile. It is worth thinking about what Arthur Miller really wanted this man to portray - is Loman deserving of the title of a tragic figure or hero who had tried to do his best in the circumstances, or is he just a loser responsible only for his own choices and mistakes? At face value, even his name seems to suggest he is meant to be the underdog, when you separate 'Lo/w' and 'man'. The title of the play with 'Death of...' is an obvious sign that Loman is indeed at least involved in a tragedy as he dies. Even though he is the head of the family and the breadwinner compared to Linda's lesser housekeeping role, throughout the play he does not have complete control over his family and his sons do not appear to respect him as a father, although it could be argued there are reasons why this is. ...read more.

The hero usually dies as a direct result of that flaw, because only this flaw is crucial in allowing the catastrophic series of unstoppable events to occur. w***y Loman clearly does not fit into the first requirement of a tragic hero. He is not born with status, and although it's not really said he is probably in the working class. Miller wanted to portray a different character, and reject the common tragic mode. In his writing 'Tragedy and the Common Man' he justified the common man being as apt a subject for tragedy in saying that Loman is a character ready to make sacrifices to secure his personal dignity, like most of us, and status is irrelevant. The traditional tragic heroes were motivated by high passions but Miller suggests these are no more admirable than Loman's determination to be liked - he says to his sons "Be liked and you will never want." So w***y's flaw in acting out against what degraded him is not like the classic tragic flaw, but the fear tied in with his actions are. Miller wrote, "...the disaster inherent in being torn away from our chosen image of what and who we are in this world...today ...read more.

The lesson is supposed to be learned that in Biff's own words, that is a "phoney dream....burn it before something happens." w***y Loman's life and death raises the question of what we as the audience live for. For many, things like material success and wealth in life mean an incredible amount, and maybe even the difference between happiness and misery. The play shows that he is under a lot of psychological pressure, and feels guilt a lot of the time, even when things are probably out of his control. The external world is like an ideal of standards which must be met. The tension is built up until things are intolerable. We see w***y at the end of his career, so it is like we have not even seen the whole story, suggesting there is a bigger picture of huge problem with American society. Despite his failures, Loman has enough similarities to a normal person to make him almost a tragic figure, because tragedy is the most accurately balanced portrayal of a human being struggling to achieve. Linda's view holds a lot of weight because all in all the treatment of w***y Loman is unfair. It is a need for any human to hold dignity at all costs, and Loman certainly does prove that he wants his. ...read more.