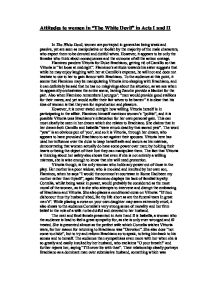 Attitudes to women in &quot;The White Devil&quot; in Acts I and II

Attitudes to women in "The White Devil" in Acts I and II In The White Devil, women are portrayed in general as being weak and passive, yet are seen as manipulative or foolish by the majority of the male characters, who expect them to be devoted and dutiful wives. However, it appears to be only the females who think about consequences and the outcome of all the action onstage. Flamineo panders Vittoria for Duke Brachiano, getting rid of Camillo so that Vittoria is "let loose at midnight". Flamineo's attitude towards his sister suggests that while he may enjoy laughing with her at Camillo's expense, he will not and does not hesitate to use to her to gain favour with Brachiano. To the audience at this point, it seems that Flamineo may be manipulating Vittoria into sleeping with Brachiano, and it can definitely be said that he has no misgivings about the situation, as we see when he apparently orchestrates the entire scene, having Zanche provide a blanket for the pair. Also when Flamineo remembers Lycurgus': "men would provide good stallions for their mares, and yet would suffer their fair wives to be barren" it is clear that his idea of women is that they are for reproduction and pleasure. ...read more.

Her mother is a poor widow, who is mocked and insulted by her own son, Flamineo, when he says "I would the common'st courtezan in Rome Had been my mother rather than thyself", again Flamineo displays his lack of familial loyalty. Cornelia, whilst being weak in power, would probably be considered as the most moral of the women, as it is she who attempts to intervene and disrupt the embracing of Brachiano and Vittoria. She also places a conditional curse on Vittoria: "If thou dishonour thus thy husband's bed, Be thy life short as are the funeral tears In great men's". While placing a curse on your own daughter may seem extremely cruel, it also shows to the audience Cornelia's very strong sense of morality and her firm belief in the role of a wife: to be dutiful and devoted to her husband. The next and final female presented in Acts I and II is Isabella, a woman who the audience is lead to feel a great sympathy for, as she is only ever wronged and ill treated. ...read more.

We also see Francisco's view of women as he instructs Isabella to "look upon other women, with what patience they suffer these light wrongs", showing that he does not in reality care for the pain of his sister, but for the honour of his family name. This is not the only cruel statement he makes, as once Isabella has left he presents his truly heartless nature by saying that the entire affair "will beget excellent laughter". This communicates Francisco's complete lack of respect for women, as it is not just any woman who he jests about, but his own sister. In this respect, he is on the same misogynistic level as Flamineo. While women are expected to be good, devoted and pure, it appears in The White Devil that it is by doing this that they are punished, and that only by seizing what power they can, by whatever means necessary, are they able to survive. Isabella however points out the main difficulty for women within the play, as she cries "O that I were a man, or that I had power". It is the men who hold the power, and therefore to gain any at all, women are forced to be manipulative and constantly think of the future. ...read more.