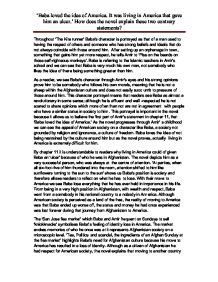 Baba and America - the novel explains the statement Baba loved the idea of America. It was living in America that gave him an ulcer by depicting Baba as a person who was more dependent on Afghanistan and its culture than he first believed.

Throughout 'The Kite runner' Baba's character is portrayed as that of a man used to having the respect of others and someone who has strong beliefs and ideals that do not always coincide with those around him. After setting up an orphanage in town, something that gains him yet more respect, he tells Amir to 'Piss on the beards on those self-righteous monkeys'. Baba is referring to the Islamic teachers in Amir's school and we can see that Baba is very much his own man, not somebody who likes the idea of there being something greater than him. As a reader, we see Baba's character through Amir's eyes and his strong opinions prove him to be somebody who follows his own morals, meaning that he is not a sheep within the Afghanistan culture and does not easily succumb to pressure of those around him. ...read more.

By chapter 11 it is understandable to readers why living in America could of given Baba an 'ulcer' because of who he was in Afghanistan. The novel depicts him as a very successful person, who was always at the centre of attention. 'At parties, when all six-foot-five of him thundered into the room, attention shifted to him like sunflowers turning to the sun to the sun' shows us Baba's position is society and therefore allows readers to reflect on what he has to lose. With their move to America we see Baba lose everything that he has ever held in importance in his life. From being in a very high position in Afghanistan, with wealth and respect, Baba went from a somebody in his national country to a nobody in America. ...read more.