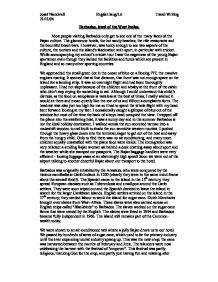 Barbados, jewel of the West Indies. Most people visiting Barbados only get to see one of the many faces of the Bajan culture. The glamorous hotels, the hot sandy beaches, the rife restaurants and the bountiful beach bars. I however, was lucky enough to see two aspects of the culture, the tourism and the island's fascination with sport, in particular with cricket. While accompanying my school's cricket tour I saw the eagerness of the young Bajan sportsmen even-though they lacked the facilities and funds which are present in England and so many other sporting countries. We approached the small green dot in the ocean of blue on a Boeing 777, the massive engines roaring. It seemed that at that distance, that there was not enough space on the island for a landing strip. It was an overnight flight and had been thoroughly unpleasant. I had not slept because of the children and a baby at the front of the cabin who didn't stop crying for something to eat. Although I could understand this child's distress, as the food on aeroplanes is tasteless at the best of times, I really wished it would sit there and moan quietly like the rest of us and fill out a complaints form. The headrest was also just too high for me so I had to spend the whole flight with my head bent forward looking at my feet. I occasionally caught a glimpse of blue out of the window but most of the time the back of a boys head occupied the view. ...read more.

But to be fair the music was very catching; I began to think my heart would start copying the beat! The breakfast in the morning was very English as well. We sat in the open restaurant looking out at the sea and every time you went to the buffet you had to cover your plate with a napkin because a swarm of birds would flock over to your plate and peck away - whether you had finished or not! That day we went on a snorkelling and fishing trip along the west coast. We trundled down to the beach where a 12 foot brightly coloured wooden boat with a canopy, and a row of peckish birds were waiting for us. All 8 of us managed to squeeze in between the snorkelling gear and fishing lines. Despite the boat being weighed down we were pushed along the coast by the powerful outboard motors at quite a speed. We arrived at our snorkelling destination, a sunken barge, which formed an artificial reef. We all jumped in off the side of the boat and swam towards the barge; we found large shoals of small brightly coloured fish but sadly no steel bands. We also saw large silver fish which the Driver called "blinkers" due to their large eyes. While we were in the midst of these fish someone from another boat threw a piece of bread right in front of us and swarms of fish swished around biting at anything they could, including my fingers. ...read more.

He checked my Dad's all-inclusive card, which worked in a whole range of hotels. He then let us through the gate with a smile. The hotel was shrouded in palm trees. The hotel was very big and white to reflect the sun, it was open and breezy and not too hot. All of the hotel staff wore very smart white suits with copper engraved nametags. We ate in the restaurant overlooking the beach. There was lots of fish to eat which is a main part of the Bajan diet. We then walked to the beach where there was a red flag and a sign saying, "Swimming is prohibited!" This was due to the high winds at the moment that caused big waves and strong currents. We left the hotel and took the same route back to the hotel by which we came. Late on Friday evening I left the little island in the Atlantic Ocean with sun-bronzed skin and feeling relaxed and at peace with the world. In some ways Barbados is an ideal holiday destination, the layed-back approach to life, the brilliant coastal hotels and the cheerful Bajans always happy to talk. I had the chance as well though to see the island's fascination with cricket. I also saw the run down places where most Bajans live. The Bajans, however, despite their lifestyle and the heat were always cheerful and relaxed. I saw the second side of the island, not the hotels built as a safe haven for western tourists, but the Bajan lifestyle. ?? ?? ?? ?? Josef Nankivell English lang/Lit Travel Writing 21/11/04 ...read more.