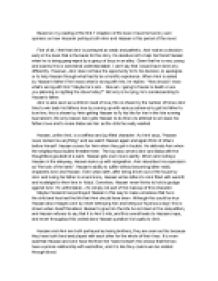 ﻿Based on my reading of the first 7 chapters of the book I have formed my own opinions on how Hosseini portrays both Amir and Hassan in this period of the novel. First of all, I feel that Amir is portrayed as weak and pathetic. Amir makes a decision early in the book that is the basis for the story. He decides not to help his friend Hassan when he is being gang-raped by a group of boys in an alley. Given that he is very young and scared, this is somewhat understandable. I can't say that I would have done any differently. However, Amir does not take the opportunity to fix his decision, to apologize or to help Hassan through what had to be a horrific experience. When Amir is asked by Hassan's father if he knows what is wrong with him, he replies: "How should I know what's wrong with him? ...read more.

Hassan gets even more saintly. When Amir betrays Hassan in the alleyway, Hassan looks up with resignation. Amir describes his expression as "the look of the lamb". Hassan's ability to suffer without becoming bitter really separates Amir and Hassan. Even years later, after being driven out of the house by Amir and losing his father to a land mine, Hassan writes letters to Amir filled with warmth and nostalgia for their time in Kabul. Somehow, Hassan never thinks to hold a grudge against Amir. It's unthinkable ? it's simply not part of the makeup of this character. Maybe Hosseini has portrayed Hassan in this way to make us believe that he is the child and has had the life that Amir should have been. Although this could be true Hassan also enrages Amir by never betraying him and being as ?loyal as a dog?, this is shown when Assef threatens Hassan to give him the kite he cut down in the competition, and Hassan refuses to ...read more.

leaving, Hassan and Ali to take up the role as the loyal friend, because both these relationships are as similar as eachother, this might represent that Baba may have betrayed Ali the same way as Amir betrayed Hassan. Hosseini portrays Hassan and Amir in very different ways, first he shows Hassan to be the loyal friendly happy child who is always respectful to his leader, and one who would never betray the closest of friends. Hosseini portrays Amir as a child who is jealous, spiteful, weak and pathetic, this is because of the betrayal of Hassan by Amir, and that he is prepared to do anything to get what he wants, in this case his fathers love. But despite all of this Hosseini still portrays the two characters as two brothers separated by class and power, as binary opposites of what their fathers once were and we are led to think that something may have happened between Ali and Baba because of these very close similarities. ...read more.