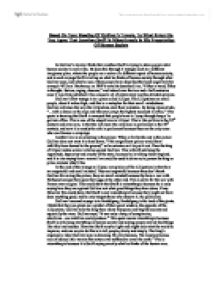 Based On Your Reading Of Gulliver's Travels, To What Extent Do You Agree That Jonathan Swift Is Misanthropic In His Presentation Of Human Society

Based On Your Reading Of Gulliver's Travels, To What Extent Do You Agree That Jonathan Swift Is Misanthropic In His Presentation Of Human Society In Gulliver's travels I think that Jonathan Swift is trying to show people what human society is really like. He does this through 4 voyages each to a different imaginary place, where the people are a satire of a different aspect of human society, and in each voyage Swift is telling us what he thinks of human society through what Gulliver says, and what he sees. Many people have described the book negatively for example William Thackeray, an 1850's novelist described it as, "Filthy in word, filthy in thought, furious, raging, obscene," and indeed over the two and a half centuries since it was first published it has caused a lot of controversy and has divided opinions. Gulliver's first voyage is to a place called Lilliput. The Lilliputians are small people, about 6 inches high, and this is a metaphor for their small-mindedness. Gulliver criticises the way the Lilliputians elect their ministers- by doing circus tricks, "...with a dance on the rope and whoever jumps the highest succeeds in office." This quote is showing that Swift is annoyed that people have to 'jump through hoops' to get into office. This is one of the stupid laws in Lilliput. ...read more.

The second part of this voyage is to Glubbdubdrib. In Glubbdubdrib, Swift is satirising superstition and magic. Gulliver gets the chance to go back in time and see what really happened in the past. He finds out that history is partly lies, "The world had been misled by prostitute writers, to ascribe the greatest exploits in war to cowards, the wisest council to fools, sincerity to flatterers, Roman virtue to betrayers of their country, piety to atheists, chastity to sodomites." This tells me that swift really thinks that history is lies and people who don't deserve it have had all the glory. The final part of the third voyage is to Luggnagg. Gulliver tells us what he would do if he could live forever. He says, " ...Procure myself riches... in the second place I would apply myself to the study of arts and science. Lastly I would carefully record every action and event of consequence that happened in the public... By which acquirement I should be a living treasury of knowledge and wisdom, and certainly become the oracle of the nation." Here Gulliver is saying that if he was a Struldbrugg, or immortal, he would first get riches for himself, then afterwards use his capacity to learn all things in arts and science, and use what he has learned to be the oracle of the nation. ...read more.

However, the Brobdignagian model is better because they have flaws and are not perfect. Swift shows this because the Brobdignagians have freak shows and this is inhumane. Furthermore I think Swift is not misanthropic because his main attack is on unjust wars, and this is a common in all four voyages. Another reason I think swift is not misanthropic, is that he only criticises those who deserve it, like the 'quack' doctors, and the drunks who use all their family's money on alcohol. Also, swift shows the flaws of mankind and wants to improve it. I know this because he wrote about good people like the Brobdignagians and the Houyhnhnms, as I said before. Swift also only tells us about what has happened to him, so if he has only had bad experiences with, for example politicians, then he can only make bad comments about them. However, Gulliver doesn't tell us about any good people in England at the time, or any good experiences he had had with people, he focuses on the bad. In conclusion, I think that Jonathan Swift is not misanthropic in his presentation of human society because he only comments on what he knows, and his main aim is to make the world better, and the best way to do this it to tell people in simple terms, in a story of a popular genre. By Rory Mitchell 4 Campion ...read more.