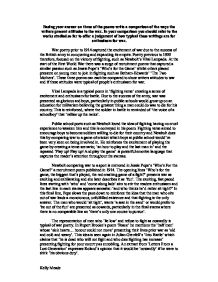 Basing your answer on three of the poems write a comparison of the ways the writers present attitudes to the war.

Basing your answer on three of the poems write a comparison of the ways the writers present attitudes to the war. In your comparison you should refer to the works studied so far to offer a judgement of how typical these writings are for enthusiasm for war. War poetry prior to 1914 captured the excitement of war due to the success of the British army in conquering and expanding its empire. Poetry previous to 1900 therefore, focused on the victory of fighting, such as Newbolt's Vitai Lampada. At the start of the First World War there was a surge of recruitment poems that captured a similar passion such as Jessie Pope's 'Who's for the Game' whilst others placed pressure on young men to join in fighting such as Betham-Edwards' 'The Two Mothers'. These three poems can each be compared to show writers attitudes to war and if these attitudes were typical of people's enthusiasm for war. Vitai Lampada is a typical poem in 'fighting verse' creating a sense of excitement and enthusiasm for battle. Due to the success of the army, war was presented as glorious and boys, particularly in public schools would grow up on an education for militarism believing the greatest thing a man could do was to die for his country. This is reinforced, where the soldier in battle is reminded of 'the voice of a schoolboy' that 'rallies up the ranks'. ...read more.

This would have been a powerful recruitment poem in 1914, as men would not have wanted to disgrace their family. The first woman is not crying due to her son being 'gallant' 'brave' and the 'nations pride', stirring language that is compared to the other mothers' description of her 'three stalwarts' as she is seen 'weeping'. The overall opinion expressed in this poem is that it is far better to die fighting for your country, than to not fight and survive. The use of two mothers is very effective, as the attitude at the time would have been that men should protect women. This therefore, is used frequently in war poetry, often personifying England as a woman in order to give the impression of a country that needs shielding from danger, such as in Brooke's 'The Soldier' that described England's 'sights and sounds' and her 'laughter'. This device is also used in 'Vitai Lampada' declaring that 'Every one of her sons must hear' and it is used again in 'Who's for the Game' in the final line for impact, as Pope states 'Your country is up to her neck in a fight, and she's looking, and calling for you'. This line is slowed down in order to really compel the reader to fight and the use of personification increases the vulnerability of the country, and its need for protection. ...read more.

The alliteration in 'And falling fling to the host behind' reinforces the determination and is an effective image of soldiers in battle. Death is presented as noble within a vast amount of war literature. Brooke's sonnet 'The Rich Dead' claims that dying makes soldiers 'rarer gifts than gold' and Lawrence Binyon's 'For the Fallen' claims that through their courageous action 'to the end, to the end they remain'. Death however is not dwelled upon among the propaganda and recruitment poems. Pope's only reference to war not being this jolly, exciting 'game' is to ask 'who knows it won't be a picnic - not much - yet eagerly shoulders a gun?' 'The Two Mothers' presents death as positive, with the cowardice of the other mother's sons as the negative argument. Overall, these three poems are typical of the literature studied so far as they aim to present war as an exciting and ennobling act to be involved in. The 'fighting verse' poems argue that to die for one's country is the most honourable thing to do and they are all clearly patriotic. When discussing death, the poets present this as a positive aspect in that these people will be remembered forever for protecting England. The recruitment poets show enthusiasm for battle and by creating the image of the coward who will not fight, effectively would have persuaded soldiers to join in the fun'. It is clear therefore, that prior to 1914, this great enthusiasm for war was typical in the writings of the time. Kelly Meade ...read more.