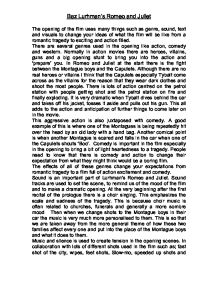 Baz Lurhman's Romeo and Juliet The opening of the film uses many things such as genre, sound, text and visuals to change your ideas of what the film will be like from a romantic tragedy to exciting and action filled. There are several genres used in the opening like action, comedy and western. Normally in action movies there are heroes, villains, guns and a big opening stunt to bring you into the action and 'prepare' you. In Romeo and Juliet at the start there is the fight between the Montague boys and the Capulets. Although there are no real heroes or villains I think that the Capulets especially Tybalt come across as the villains for the reason that they wear dark clothes and shoot the most people. There is lots of action centred on the petrol station with people getting shot and the petrol station on fire and finally exploding. It is very dramatic when Tybalt dives behind the car and takes off his jacket, tosses it aside and pulls out his gun. ...read more.

This emphasizes the scale and sadness of the tragedy. This is because choir music is often related to churches, funerals and generally a more sombre mood Then when we change shots to the Montague boys in their car the music is very much more personalised to them. This is so that we are taken away from the more general theme of how these two families affect every one and put into the place of the Montague boys and what it does to them. Music and silence is used to create tension in the opening scenes. In collaboration with lots of different shots used in the film such as; fast shot of the city, wipes, feet shots, Slow-mo, speeded up shots and eye shots. All of these reinforce the genres and help build up atmosphere. There are also certain images such as Jesus, helicopters, police, fire, a broken ring and lots of crosses. The crosses and the Jesus remind you of how religious the families are. The other images bring you into the action of the film and again reinforce the genres. ...read more.

Big opening music is often used in action movies such as James Bond. This also present in Romeo and Juliet suggesting action to follow. The whole effect of sound on the opening enhances and reinforces the genres and brings you into the action. Text is also a big part of the opening. Repetition of certain words such as Montague and Capulet on large bill boards and high rise buildings reminds you of the conflict between the families. There is also repetition of the prologue to get it into your head. The key phrases are emphasized. For example "Two houses both, alike in dignity" and "Where civil blood makes civil hands unclean." This gets the whole basic foundation in your mind. To illustrate the main focus of the story the text "A pair of star crossed lovers take their lives," and, "which but their children's end nought could remove" is flashed on the screen a few times. The overall effect of the text is to get in your mind the tragedy that will happen. All of the above come together to change your expectations from what you think it would be like to an exciting action filled start, but despite this still keeps the passion and romance from the original. ...read more.