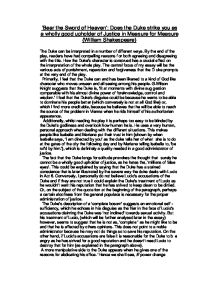 'Bear the Sword of Heaven': Does the Duke strike you as a wholly good upholder of Justice in Measure for Measure {William Shakespeare}.

'Bear the Sword of Heaven': Does the Duke strike you as a wholly good upholder of Justice in Measure for Measure {William Shakespeare} The Duke can be interpreted in a number of different ways. By the end of the play, readers have had compelling reasons for both agreeing and disagreeing with the title. How the Duke's character is construed has a crucial effect on the interpretation of the whole play. The central focus of my essay will be the various acts of punishment, reparation and forgiveness that the Duke prompts at the very end of the play. Primarily, I feel that the Duke can and has been likened to a kind of God like character who moves unseen and all seeing among his people. G.Wilson Knight suggests that the Duke is, 'lit at moments with divine suggestion comparable with his almost divine power of foreknowledge, control and wisdom.' I feel that the Duke's disguise could be because he wants to be able to dominate his people better {which conversely is not at all God like} or, which I find more creditable, because he believes that he will be able to reach the source of the problem in Vienna when he rids himself of his authoritarian appearance. ...read more.

There is also some reservation about the mental state of the Duke to uphold justice. The Duke paints a picture of the world turned upside down in Act 1, Scene 3 because the laws have not been enforced: 'quite athwart/ Goes all decorum'. He uses a sequence of animal imagery, 'o'er-grown lion in a cave' to convey this disturbed state, and his first image is a mixed metaphor, which may highlight both the topsy-turvy state of Vienna and of the Duke himself. I think that in the way these speeches represent a breakdown of order in the state they also reflect a breakdown in the Duke, which surely cannot lead to a just leader. The Duke's natural ability to be an authority figure is illustrated at certain points in the play. In Act 3, scene 1 it is clear that he is a ruler even when he is dressed as a monk; his orders to Isabella are clear and detailed, full of imperative verbs of command, almost breathless in their speed and length, 'Haste you speedily to Angelo; if for this night he entreat you to his bed, give him promise of satisfaction.' ...read more.

So the initial thought of callousness on the Duke's part is erased through deeper deliberation. There is one worry that is evoked after reading the last act of the play and that is that the Duke seems to have lapsed into excessive clemency, which is a reminder of what happened before. This worry is soon expunged when the reader realises that the laws before were allowed to 'slip' but this time the Duke is in full control. In conclusion I have decided that as mediator between the extremes of Angelo and Isabella stands the Duke, 'a gentleman of all temperance'. He applies principle to practice to the near tragic situation and all of his decisions have been proved beneficial to nearly everybody. The only fault I can express would be his treatment of Lucio as he, I feel, has misinterpreted Lucio's lighthearted character and taken his slanders too seriously. Through the whole play the Duke's remedial functions work according to plan, with exception of Barnadine's head, conveying the wisdom and careful considerations of the Duke. Justice is suitably combined with mercy and thus one can rightly conclude that the Duke does, 'bear the sword of heaven' and that he is an upright dispenser of justice. ...read more.