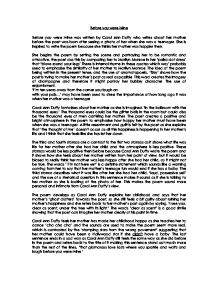 Before you were mine was written by Carol Ann Duffy.

Before you were Mine Before you were mine was written by Carol Ann Duffy who writes about her mother before the poet was born after seeing a photo of her when she was a teenager. She is inspired to write the poem because she thinks her mother was happier then. She begins the poem by setting the scene and portraying her to be romantic and attractive, the poet dos this by comparing her to Marilyn Monroe in her 'polka-dot dress' that 'blows round your legs' There is internal rhyme in these quotes which was' probably used to emphasise the similarity of her mother to Marilyn Monroe. The idea of the poem being written in the present tense, and the use of onomatopoeia, 'fizzy' shows how the poet is trying to make her mother's past as real as possible. This word creates the imagery of champagne and therefore it might portray her bubbly character. ...read more.

These stanzas would be less positive then before because Carol Ann Duffy wrote the poem and it shows how she feels about her mother written from her point of view, but it would be biased to really think her mother was less happy after she had her child, as it might not be true. The words ' I'm not here yet' is a definite statement which sounds like a warning coming from her to say that her mother's teenage fun would end if she has a baby. The third stanza describes what it was like after her she had her child, 'loud, possessive yell' and the use of a rhetorical question in this sentence makes it sound as if she is talking to her mother as she is looking at the photo of her. This makes the poem sound more personal and intimate from Carol Ann Duffy's view. ...read more.

out much more than the rest of the lines, 'that glamorous love lasts where you sparkle and waltz and laugh before you were mine.' The structure of the poem is in regular stanzas with four/five lines in each stanza. This shows the regularity of the photos in the photo album and helps the reader to visualise it. The lines are irregular in some places and they are used to give emphasis on a word, for example, 'in the ballroom with the thousand eyes, the fizzy, movie tomorrows.' The irregularity of this line leaves tomorrow on its own indicating that there is uncertainty of whether she would be going to the cinema 'tomorrow' but she might do. The tone of the poem is generally quite cheerful and happy but there is some guilt as well. Personally I think that the poem is very interesting and Carol Ann Duffy uses imagery effectively in the poem to get her opinions of her mother across to the reader. ...read more.