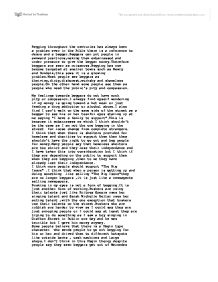 Begging throughout the centuries has always been a problem even in the Bible there is a reference to Jesus and a beggar.Beggars can put people in awkward positions,making them embarrassed and under pressure to give the beggar money.Therefore beggars are seen as nuisances.Begging has now become targeted at smaller towns such as Newry and Dundalk,this sows it is a growing problem.Most people see beggars as theiving,dirty,dishonest,workshy and shameless people.On the other hand some people see them as people who need the public's pity and compassion. My feelings towards beggars do not have much pity or compassion.I always find myself wondering if my money is going toward a hot meal or just feeding a drug addiction or alcohol abuse.I also find I can't walk on the same side of the street as a beggar to see his or her tearful eyes staring up at me saying "I have a family to support".This is because it embarrasses me which I think shouldn't be the case as I am not the one begging in the street for loose change from complete strangers. ...read more.

Some people believe that there is a Fagin type character who sends people to go out begging for him or her and drived them to different hotspots like outside banks , cash machines and large shops.I don't think in this Fagin theroy despite people say they seen beggars get out of Mercedes because I believe that anyone who sits on a street and begs would have to be on an all time low. Beggars who use children get more money but I think they are exploiting their children.I wouldn't be more inclined to give to beggars with babies as I feel so bad I would have to cross the street unable to look at their dirty faces and torn clothes and I think is that really the only clothes they have got ,torn and dirty or are they just trying to squeeze as much guilt as they can from hard working people. In spite of not having much pity for the beggars of Ireland, if I was to give money it would probably be to the refugees because I can imagine being moved from Ireland to a country ...read more.

I agree with the government. This way people can be sure that their money is going to good use. I agree that some beggars are unscrupulous as some of them take pocket money from young children. He said that beggars are shameless but I think that beggars do feel full of shame upon themselves but in order to stay alive they need to show no shame and get on with begging. He also said beggars are workshy and I agree with this. I have established that I don't think that buskers are beggars as they are using their talents to earn money but beggars just sit there looking smelly and dirty asking for money. I agree with Parsons saying that they exploit peoples consciences.They make people feel bad if they don't give money and make selfish people feel like they have done their good deed for the day. To conclude I would like to say that the general thought on beggars is that they are dirty,theiving nuisances who shouldnt be given pity or money because help is already provided due to the publics generosity in homless shelters etc... ...read more.