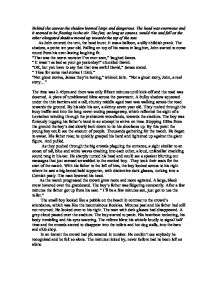 Behind the canvas the shadow loomed large and dangerous. The head was enormous and it seemed to be floating in the air. The feet, as long as canoes, would rise and fall as the other elongated shadow moved up towards the top of the tent. As John entered the tent, the head burst. It was a balloon, a silly childish prank. The shadow, a petite ten year old. Falling on top of his mates in laughter, John started to come round from his ever-lasting laughing fit. "That was the worst monster I've ever seen," laughed James. " It wasn't as bad as your go yesterday!" chuckled David. "OK, but you have to say that that was awful David," James stated. " Time for some real stories I think." "Not ghost stories, James they're boring," whined John. "Not a ghost story, John, a real story..." The time was 2-45pm and there was only fifteen minutes until kick-off and the road was deserted. A piece of tumbleweed blew across the pavement. A bulky shadow squeezed under the thin barriers and a tall, chunky middle-aged man was walking across the road towards the ground. ...read more.

He looked over to his right. The man with dark glasses had disappeared. A grey cloud passed over the stadium. The boy started to panic. His heartbeat rocketing, his body trembling and his eyes watering. The referee blew his whistle loudly to signal half time and the crowds started to disappear into the toilets and hot dog stalls, into the bars and club shop. In an instant the crowd had plummeted in number. He couldn't see anybody he recognized and he felt so alone. The minutes ticked by, never before had he been left so alone. As the crowd reappeared from the exits, every fan that wasn't the boy's Dad was like a knife in his heart, as painful as a pig to the slaughter. After nearly giving up hope of his father returning, the strange dark-glassed man emerged from the exit, a wide grin on his face. As he placed himself next to the boy he glanced over. " Alright kiddo, are you enjoying yourself?" The small boy, as frightened as a cat running away from a dog, hesitantly replied with a nod. ...read more.

He yanked it. He kicked it. He barged into it but it still wouldn't open. He was going, crazy what place was this? He could see men and women in wheelchairs and crutches ambling round the place. Men with head bandages and women with there arms in slings. Every few minutes a big trolley would pass the room. The boy would knock as hard as he could but still there would be no answer. Nobody could see him and no one answered his cries. As the fourth trolley rushed past it stopped just outside the door. A tall, chunky middle-aged man stepped off it. The boy instantly recognized the figure. It was his father. The door was unlocked immediately and the two were re-united. The boy was still unsure what had happened but he didn't care in the slightest. "That wasn't scary at all James, tell us another one," laughed John. "It was scary John, look how scared Peter is," "Peter, what's the matter that wasn't as scary as one of mine." As the boys looked across to Peter who was shaking like a leaf, the door flap flew open as a cold chilling wind descending down their spines, and in the door laid a pair of dark shaded glasses. ...read more.