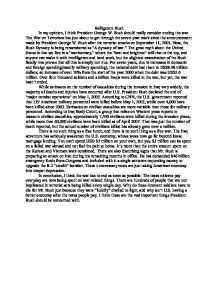 Belligerent Bush In my opinion, I think President George W. Bush should really consider ending the war. The War on Terrorism has just about to get through the seven-year mark since the announcement made by President George W. Bush after the terrorist attacks on September 11, 2001. Now, the Bush Dynasty is being remembered as "A dynasty of war." The great myth about the United States is that we live in a "meritocracy," where the "best and brightest" will rise to the top, and anyone can make it with intelligence and hard work, but the slightest examination of the Bush family tree proves that all this is simply not true. ...read more.

President Bush declared the end of "major combat operations" on May 1, 2003. According to CNN, the U.S. government reported that 139 American military personnel were killed before May 1, 2003, while over 4,000 have been killed since 2003. Estimates on civilian casualties are more variable than those for military personnel. According to Iraq Body Count, a group that relies on Western press reports to measure civilian casualties, approximately 7,500 civilians were killed during the invasion phase, while more than 60,000 civilians have been killed as of April 2007. That was just the number of death reported, but the actual number of civilians killed has already gone over a million. ...read more.

Bush is preparing an attack on Iran during his remaining months in office. He has demanded $46 billion emergency funds from Congress and included with it a single sentence requesting money to upgrade the B-2 "stealth" bomber. These unnecessary costs are just taking American economy into deeper depression. In conclusion, I think the war has to end as soon as possible. The taxes citizens pay everyday are now being spent on war-related things. There are hundreds of people that are not implicated in terrorist acts being killed every single day. Why do these innocent soldiers have to die for Mr. Bush just because they were "luckily" drafted to fight, and why isn't U.S. having a better economy after the taxes people pay. I think these are the real important things President Bush should be concerned with. ...read more.