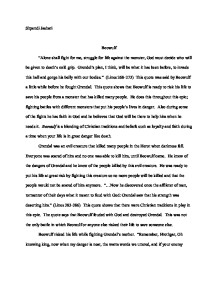 Shpendi Jashari Beowulf "Alone shall fight for me, struggle for life against the monster, God must decide who will be given to death's cold grip. Grendel's plan, I think, will be what it has been before, to invade this hall and gorge his belly with our bodies." (Lines 268-273) This quote was said by Beowulf a little while before he fought Grendal. This quote shows that Beowulf is ready to risk his life to save his people from a monster that has killed many people. He does this throughout this epic; fighting battles with different monsters that put his people's lives in danger. Also during some of the fights he has faith in God and he believes that God will be there to help him when he needs it. Beowulf is a blending of Christian traditions and beliefs such as loyalty and faith during a time when your life is in great danger like death. ...read more.

Beowulf risked his life while fighting Grendal's mother. "Remember, Hrothgar, Oh knowing king, now when my danger is near, the warm words we uttered, and if your enemy should end my life then be, oh generous prince, forever the father and protector of all whom I leave behind me, here in your hands, my beloved comrades left with no leader, their leader dead." (Lines 450- 457) Beowulf says this before he goes in and tries to fight Grendal's mother. The quote shows that he knows that there is a chance that he might not come back. He still remains loyal to his people and goes to fight this enemy. He came back and all the people praised him on his victory. Beowulf's final fight was against the dragon. Beowulf said, "I'd use no sword, no weapon, if this beast could be killed without it, crushed to death like Grendal, gripped in my hands and torn limb from limb. ...read more.

I swear that nothing he ever did deserved an end like this." (lines 760 - 770) This was said by one of Beowulf's warriors when he sees that Beowulf is dying while in battle. This warrior was very loyal to his leader, unlike the other warriors which were scared, and he goes into the battle, risks his life to save Beowulf, slays the dragon with the help of Beowulf, and then goes and gets the riches. When the warrior comes back to celebrate with Beowulf, but when he comes back out he finds that Beowulf has died. Throughout this epic people put their lives at risk in the act of loyalty their people and their leader. Beowulf risks his life for his people a number of times. One of the warriors risks his life for Beowulf, his leader, in the act of loyalty. This all shows the blending of Christian traditions in the epic, Beowulf. ...read more.