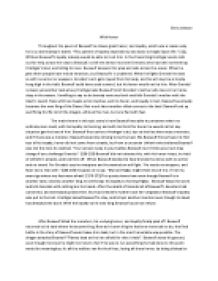 Beowulf, Themes of Honour and Perseverance.

﻿Chris Johnson With Honor Throughout the poem of Beowulf he shows great honor, and loyalty, which was a reason why he is so dominating in battle. ?This pattern of loyalty dependency was basic to Anglo Saxon life.? (11); Without Beowulf?s loyalty nobody would be able to trust him. In the Poem King Hrothgar sends calls out for help across the seas to Beowulf, to kill the demon monster Grendel, who has been tormenting Hrothgar?s land, and killing his men. Beowulf answers this plea and sails across the ocean. When he gets there people have mixed emotions, but Beowulf?s is unaltered. When he fights Grendel he does so with no armor or weapons. Grendel?s arm gets ripped from his body, and his arm kept as a trophy hung high in the halls. ...read more.

Beowulf first come to Hrothgar?s aid, due to the fact there was a monster, and if there was a monster, Beowulf would die striving to be the best. We Beowulf first arrived, his first test of his loyalty, honor did not come from a battle, but from a uncertain Unferth who believed Beowulf was not the hero he claimed. ?You?ve been lucky in your battles Beowulf, but I thinks your luck may change if you challenge Grendel.? (258-259) Beowulf did not tolerate this, with his honor intact, he held of Unferth?s attacks, and told him off. When Beowulf decided to face Grendel he did so with no armor and no sword. For Grendel used no weapons and he wanted an evil fight. ?He needs no weapons, and fears none. ...read more.

The dragon attacked Beowulf ?Flames beat at the iron shield for time it held?. Beowulf stood his ground, even though he knew he might not return. But if he was to run everything he had done to this point would be meaningless. As all the soldiers ran for their lives, losing all there honor, by being disloyal to the king ?they ran for their lives, fled deep in a wood.? (748-749); Beowulf with just himself and his faithful companion Wiglac, ?And only one of them remained, stood there, miserable, remembering as a good man must, what kinship should mean,? (749-751). managed to kill the dragon, but at the expense of Beowulf?s life. Beowulf died how every man wished; in battle with more honor and loyalty than any of his peers. He died fighting his final battle, as a hero should. ...read more.