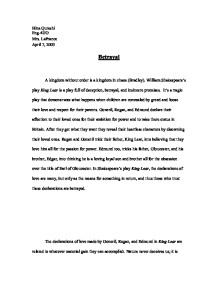 Hina Qureshi Eng-4UO Mrs. LaFrance April 7, 2003 Betrayal A kingdom without order is a kingdom in chaos (Bradley). William Shakespeare's play King Lear is a play full of deception, betrayal, and insincere promises. It's a tragic play that demonstrates what happens when children are concealed by greed and loose their love and respect for their parents. Goneril, Regan, and Edmund declare their affection to their loved ones for their ambition for power and to raise there status in Britain. After they get what they want they reveal their heartless characters by disowning their loved ones. Regan and Goneril trick their father, King Lear, into believing that they love him all for the passion for power. Edmund too, tricks his father, Gloucester, and his brother, Edgar, into thinking he is a loving loyal son and brother all for the obsession over the title of Earl of Gloucester. In Shakespeare's play King Lear, the declarations of love are many, but only as the means for something in return, and thus those who trust these declarations are betrayed. The declarations of love made by Goneril, Regan, and Edmund in King Lear are related to whatever material gain they can accomplish. Nature never deceives us; it is always we who deceive ourselves (Trust, Deception, Betrayal). King Lear's tragic flaw is the division of his kingdom and his inability to see the true natures of people because of his pride. ...read more.

"Wear this; spare speech. / Decline your head [she kisses him.] This kiss, if it durst speak, / Would stretch they spirits up into the air" (IV ii 25-28). Goneril is showing her affection to Edmund that she will do anything for him. When Regan's husband, Duke of Cornwall, dies Regan shows no remorse and seeks to marry Edmund: "My lord is dead; Edmund and I have talked, / And more convenient is he for my hand/ Than for your lady's. You may gather more, If you do find him, pray you, give him this..." (IV v 34-37). Regan tells Oswald to go tell Goneril that it is more appropriate that Edmund marries Regan than Goneril, since her husband just died. This shows that she is greedy and does not care about anyone except for herself. These declarations of love lead their victims to betrayal and fatal consequences. When Lear is rejected by Goneril and Regan and stripped of his "hundred knights and squires" (I iv 248), he is left with "nothing" besides the loyal company of Kent and the Fool. Before entering the hovel, he realized that he has been a man "more sinned against than sinning" (III ii 63). He has realized that he was foolish to do Cordelia wrong, the only daughter who truly loved him, and that the truth has been revealed about his daughters. ...read more.

Edmund forges personal prosperity with betrayal and treachery, and his obsession with his legitimate brother proves that he is obsessed with status in the play. His goals are set out to get recognition by any means necessary. Both Goneril and Regan fall in love with Edmund but their jealousy destroys them both. Goneril says: "I had rather lose the battle than that sister/ should loosen him and me" (V i 22-23). This proves how greedy she is; she will rather lose the battle with the French than to lose Edmund to her own sister, "If not, I'll ne'er trust medicine" (V iii 116-117). Embittered by this rivalry, Goneril poisons Regan, and takes her own life. Their jealousies of one another ultimately lead to their destruction. Gloucester and Lear both get the wrong impression about there children, because of which one goes sightless and the other loses his sanity. This only happens after they both can finally see the true personality of their children. To hide their true ravenousness, Regan and Goneril deceit their father by making him believe that they love him. Being the b*****d son, Edmund was deprived of respect and rank that he thought was rightfully his. He too wins his fathers' and brothers' trust and then destroys them. This proves that betrayal can only happen if you love (Trust, Deception, Betrayal). Betrayal is motivated by ambition and greed which all these characters had. Ambition, greed, and deception all lead to one culmination ending, death. ...read more.