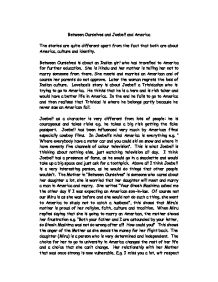 Between Ourselves and Joebell and America The stories are quite different apart from the fact that both are about America, culture and identity.

Between Ourselves and Joebell and America The stories are quite different apart from the fact that both are about America, culture and identity. Between Ourselves is about an Indian girl who has travelled to America for further education. She is Hindu and her mother is telling her not to marry someone from there. She meets and marries an American and of course her parents do not approve. Later the woman regrets the loss of Indian culture. Lovelace's story is about Joebell a Trinidadian who is trying to go to America. He thinks that he is a hero and is risk taker and would have a better life in America. In the end he fails to go to America and then realises that Trinidad is where he belongs partly because he never saw an American fail. Joebell as a character is very different from lots of people: he is courageous and takes risks e.g. he takes a big risk getting the fake passport. Joebell has been influenced very much by American films especially cowboy films. In Joebell's mind America is everything e.g. ...read more.

How could you!" This shows the anger of the Mother as she sends the money for her flight back. The daughter (Miru) is a person who is very determined and independent. The choice for her to go to university in America changes the rest of her life and a choice that she can't change. Her relationship with her Mother that was once strong is now vulnerable, E.g. I miss you a lot, wit respect and love, yours Miru". This was Miru's first letter, the last letter that she wished she had written conveyed a lot more anger e.g. I am even more astounded by your lack of understanding, you show no sympathy for my inner struggle", this shows her anger at her mother. 'Between Ourselves' is a story that has been written in a series of letters between mother and daughter. I think that this shows that it is a personal story and intimate. The letters give the reader the idea that they are eavesdropping on someone else's conversation. In Joebell and America the story changes from third person to first person. ...read more.

I think this story would keep you at the "edge of your seat" in a more serious way. The different stories tell two numerous attractions of America, firstly in 'Between Ourselves' the letters make you think that this is the homeland of the world, where you meet a whole new world, but the food is not as good as the food in Calcutta, whereas in 'Joebell and America, the attraction to America is having a chance to watch seventy five channels of colour television. Personally I think that just going to America to watch TV is very sad. When Earl Lovelace wrote 'Joebell and America' I think he wanted to make us feel that Trinidad society is worth staying in, rather than going to America, and that Joebell would be better in Trinidad because he likes to walk and likes to know everyone around him, in 'Between Ourselves' the author wants us to think that when you move from one country to another, it is like changing cultures and is never simple, also when you move countries and stay for a long time your culture and identity from your homeland maybe lost. ...read more.