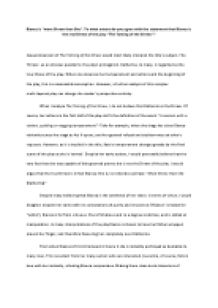 Bianca is more Shrew than She. To what extent do you agree with the statement that Bianca is the real Shrew of the play The Taming of the Shrew?

﻿Bianca is ?more Shrew than She?. To what extent do you agree with the statement that Bianca is the real Shrew of the play ?The Taming of the Shrew?? Casual observers of The Taming of the Shrew would most likely interpret the title?s subject- The ?Shrew?- as an obvious parallel to the play?s protagonist. Katherina, to many, is regarded as the true Shrew of the play- When one observes her temperament and actions and the beginning of the play, this is a reasonable assumption. However, a further analysis of this complex multi-layered play can change the reader?s perspective entirely. When I analyse The Taming of the Shrew, I do not believe that Katherina is the Shrew. Of course, her actions in the first half of the play do fit the definition of the word- ?A woman with a violent, scolding or nagging temperament?- Take for example, when she drags her sister Bianca violently across the stage as Act II opens, and her general refusal and stubbornness at other?s requests. ...read more.

But Bianca?s manipulative actions, as portrayed in some interpretations of the play, present her as reasoning with Kate to untie her, but as soon as her father round the corner, turning hysterical, so as to make herself appear free of all guilt to her father, and land Kate in the wrong. If the men of the play knew of Bianca?s manipulations, they would probably regard her as the Shrew instead, as they would consider such actions not becoming of a woman undesirable. Similar ?Shrewish? events ensue in Act 3 Scene 1, when Bianca is presented with her teachers, Lucentio and Hortensio in disguise. She is both flirtatious and mocking in equal measure to each of her teachers, showing Lucentio she is interested in his affections and Hortensio that she is not. She informs them of these things somewhat deceitfully; she translates Lucentio?s Latin work into a hidden message for him in which she says, ?presume not, despair not?- She ensures he knows that his love is not unrequited and to continue courting her. ...read more.

The idea of Bianca answering to a woman?s call and not a man?s is a powerful one, as it highlights her true temperament both to the audience today and to the characters in the play- As far as the men can understand, there has been a role reversal on the parts of the sisters- Kate has indeed been tamed and Bianca, arguably, is the Shrew. Personally, I find this role reversal very interesting, however the fact that this reversal is evident means it is harder to exclusively argue that Bianca is a Shrew whilst Katherina is not. The more obvious interpretation in the Taming of the Shrew is that Kate is the woman of scolding, harsh temperament- As she is more violent than Bianca, and more overtly stubborn, at least in the earlier parts of the play. However, I find personally that it is Bianca?s deceitful, manipulative actions that seem the most contrary to the Elizabethan ideal of the perfect woman- Therefore making her seem more of the Shrew. After all, violent, shocking actions are always easier to control and stop- It is subtle, manipulative actions that are concocted in people?s heads that are harder to notice- And infinitely harder to tame. ...read more.