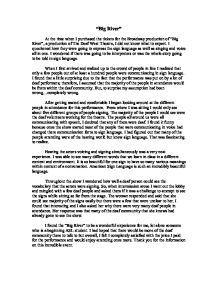 "Big River" At the time when I purchased the tickets for the Broadway production of "Big River", a production of The Deaf West Theatre, I did not know what to expect. I questioned how they were going to express the sign language as well as singing and voice all in one. I wondered if there was going to be interpreters or was the whole story going to be told in sign language. When I first arrived and walked up to the crowd of people in line I realized that only a few people out of at least a hundred people were communicating in sign language. ...read more.

The majority of the people I could see were the deaf volunteers working for the theatre. The people all around us were all communicating with speech, I doubted that any of them were deaf. I found it funny because once the show started most of the people that were communicating in voice had changed there communication form to sign language. I had figured out that many of the people attending were of the hearing world but knew sign language. That was fascinating to realize. Hearing the actors voicing and signing simultaneously was a very neat experience. I was able to see many different words that we learn in class in a different context and environment. ...read more.

The woman responded and said that she could see majority of the signs easily but there were a few that were unclear to her. I found that interesting and I also asked her why there were very many deaf people in attendance. Her response was that many of the deaf community that she knows had already gone to see the show. I found the "Big River" to be a wonderful experience for me, let alone someone who is a beginning ASL student. I had hoped that there would be more of the deaf community there to talk to but overall, I felt I completely satisfied with the price I paid for the performance and would enjoy attending once more. Thank you for the information on this incredible event. ...read more.