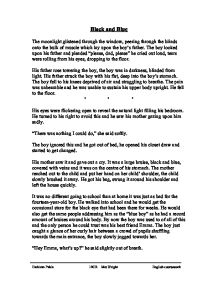 Black and Blue The moonlight glistened through the window, peering through the blinds onto the bulk of muscle which lay upon the boy's father. The boy looked upon his father and pleaded "please, dad, please" he cried out loud, tears were rolling from his eyes, dropping to the floor. His father rose towering the boy, the boy was in darkness, blinded from light. His father struck the boy with his fist, deep into the boy's stomach. The boy fell to his knees deprived of air and struggling to breathe. The pain was unbearable and he was unable to sustain his upper body upright. He fell to the floor. * * * His eyes were flickering open to reveal the natural light filling his bedroom. He turned to his right to avoid this and he saw his mother gazing upon him sadly. "There was nothing I could do," she said softly. The boy ignored this and he got out of bed, he opened his closet draw and started to get changed. His mother saw it and gave out a cry. It was a large bruise, black and blue, covered with veins and it was on the centre of his stomach. ...read more.

The only support Johnny had was Emma. It was lunchtime and things were becoming tense between Johnny and a year 11 named Albert. "I don't know what you think your doin' runnin' in to me like that," said Albert enraged and furious. "I'm sorry, it was an accident. I'm really sorry," said Johnny in a calm and relaxed voice. But Albert didn't seem to of heard that apology and he swung his fist viciously towards Johnny, but Johnny was too quick, after all he had a lot of practice, and he moved out of the way. "I said I'm sorry" said Johnny, repeating himself but this time Johnny was caught of guard and Albert struck with his right fist again into the boy's stomach. Johnny fell to the ground instantly and the people around him starting to cheering and waiting for Johnny to reply. He didn't reply back to Albert's ferocious attack and his fellow pupils around him starting walking off and booing. But the thing that hurt most for Johnny was that in the mists of the pupils he heard the words: "what a loser". ...read more.

The boy stood there motionless. What would he do? All he could hear was silence. The boy wasted no time and he through himself along with the backpack through the window. Not looking back the boy was running for his life. He ran and ran for what seemed forever to the nearest main road and in the darkness the stars were his only source of light. When he eventually reached the main road the lampposts replaced the stars and the boy began to stick his hand out. He didn't care where he was going as long as he got a lift. The wind brushed against his face and he was beginning to feel the cold entering his body. No driver had pulled over for the fourteen year old boy and he was doubtful if he would make it. But, before he was about to try another main road a car pulled over. The boy was filled with excitement as well as nervousness. The boy took four lengthy steps towards the vehicle and he opened the door. It was his mother. Before the boy could say or do anything he noticed a bruise on his mother's eye, black and blue, and she looked upon the boy and said "were leaving, Johnny." Harkiran Pabla 10CR Mrs Wright English coursework ...read more.