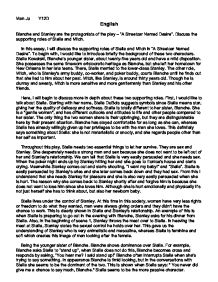 Blanche and Stanley are the protagonists of the play - &quot;A Streetcar Named Desire&quot;. Discuss the supporting roles of Stella and Mitch.

Man Ju Y12D English Blanche and Stanley are the protagonists of the play - "A Streetcar Named Desire". Discuss the supporting roles of Stella and Mitch. In this essay, I will discuss the supporting roles of Stella and Mitch in "A Streetcar Named Desire". To begin with, I would like to introduce briefly the background of these two characters. Stella Kowalski, Blanche's younger sister, about twenty-five years old and have a mild disposition. She possesses the same timeworn aristocratic heritage as Blanche, but she left her hometown for New Orleans in her late teens. There, Stella married to the lower-class Stanley. The other role, Mitch, who is Stanley's army buddy, co-worker, and poker buddy, courts Blanche until he finds out that she lied to him about her past. Mitch, like Stanley, is around thirty years old. Though he is clumsy and sweaty, Mitch is more sensitive and more gentlemanly than Stanley and his other friends. Here, I will begin to discuss more in depth about these two supporting roles. First, I would like to talk about Stella. Starting with her name, Stella DuBois suggests symbols since Stella means star, giving her the quality of delicacy and softness. Stella is totally different to her sister, Blanche. ...read more.

In heaving the meat at Stella, Stanley states the s****l control he holds over her. This gave us the understanding of Stanley who is very animalistic and masculine, whereas Stella is feminine and soft which creates this image of man looking after the female. Being the younger sister of Blanche. Blanche shows dominance over Stella. For example, Blanche asks Stella to "stand up", when Stella does not do this, Blanche becomes cross and responds by asking, "You hear me? I said stand up!" Blanche often interrupts Stella when she's trying to say something. In appearance Blanche is timid looking, but in the conversations with Stella she seems to be the dominant of the two. This is shown when Stella says: " You never did give me a chance to say much, Blanche." Stella seems to be the more passive character. Stella is very much aware of the hostility between Stanley and Blanche. For example, she asks Stanley not to mention the fact that she is pregnant. Stanley later deliberately ignores the request when he realises that Blanche has outwitted him during a discussion of what has happened to his wife's family home. After rifling through her personal possessions, he throws the news at Blanche, as a calculated move. ...read more.

Blanche noticed Mitch's sensitivity the first time they meet saying to Stella: "that one seems - superior to the others". He is a gentleman and is conscious of his manners. Because he is not very intelligent he does not see through Blanche's lies and the fact that he had never suspected her dishonesty makes his pain worse, when he finds out. The pain is also worsened because he knows his mother is not going to see him married before she dies. He does not believe Stanley when he first reveals the truth about Blanche, but is deeply hurt when he checks the story and realises that it is true. Mitch finally confronts Blanche about her dishonesty in Scene 9. Mitch points her avoidance of light and then rips of the lantern and forces Blanche under the light. He tells her that he doesn't mind her age but dislikes her deceitfulness. Williams gives the character the words "You're not clean enough to bring in the house with my mother" but then attempts to r**e the woman suggesting that Mitch sees women as either virgins or whores. In conclusion, Stella and Mitch play important roles in this play. Without the presence of these two characters, the play would not be such a success. ...read more.