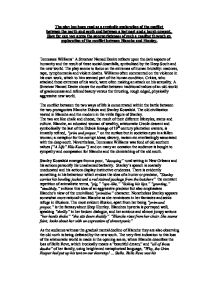 The play has been read as a symbolic exploration of the conflict between the north and south and between a lost past and a harsh present. How far can you argue the appropriateness of such a reading through an exploration of the conflict between Blanche and Stanley. Tennessee Williams' A Streetcar Named Desire reflects upon the dark aspects of humanity and the result of these social downfalls, symbolised by the Deep South and the new world. The play seems to focus on the extremes of human brutality: madness, r**e, nymphomania and violent deaths. Williams often commented on the violence in his own work, which to him seemed part of the human condition. Critics, who attacked these extremes of his work, were often making an attack on his sexuality. A Streetcar Named Desire shows the conflict between traditional values of an old-world of graciousness and refined beauty versus the thrusting, rough edged, physically aggressive new world. ...read more.

Blanches hysteria is portrayed well, speaking "shrilly" in her broken dialogue, and her anxious and almost jumpy actions "her hands shake" "she sits down shakily" "Blanche rises from her chair. She seems faint; looks about her with an expression of almost panic" As the audience witness the gradual mental decline of Blanche they are also observing the old north is being defeated by the new south. The very first indication to this loss of the aristocratic world is made in the opening scene, where Blanche describes the loss of Belle Reve, which ironically means a "beautiful dream," and "all of those deaths" of her family, using heightened metaphorical language, "Why, the Grim Reaper had put up his tent on our doorstep! ... Stella. Belle Reve was his headquarters!" The birth of Stella and Stanley's child is a symbolic contrast; the DuBois family members are dying taking with them the old values whereas the Kowalski child will carry on the new aggressive values, a significant symbolism of the defeat of the old south. ...read more.

Yet Stanley's language exposes no remorse, "no, siree, bob!" in fact he seems to be enjoying watching the old south crumbling. And the audience cannot help but feel sympathetic towards the "parasitical casualty of the changeover." Through the clashing of the two protagonists, Blanche and Stanley, emerges the conflict between the north and the south, leading to the consequential elimination of the old world, ending with a snapshot of new age America. The southern values were nothing but mere ideologies, as the Deep South struggled to integrate them with reality. The weaknesses of the old world are exposed during the American civil war but also in the accomplishment of the new world. However there is a sense that Williams is cautious of the aggressive new world, which seems harsher and darker than the old south. "Immorality is the very foundation of goodness and the pillar of righteousness. Immorality, however, is the threshold towards obvious wickedness"[Thomas Babington] it seems this critic shares the viewpoint of Williams, who suggests that although the old south was corrupt, deceitful and artificial the new world is darker and much more aggressive. ?? ?? ?? ?? ...read more.

This is a well written essay which shows a clear understanding of the play and focuses on the question. There is evidence of wider reading and research, a knowledge of contextual factors and the inclusion of comments from critics. In places interesting points need further exploration and more textual references are needed to fully explore some ideas.