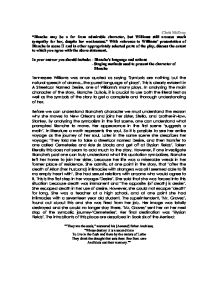 Blanche may be a far from admirable character, but Williams still arouses much sympathy for her, despite her weaknesses

Chris McEvoy "Blanche may be a far from admirable character, but Williams still arouses much sympathy for her, despite her weaknesses." With reference to Williams' presentation of Blanche in scene II and in other appropriately selected parts of the play, discuss the extent to which you agree with the above statement. In your answer you should include: - Blanche's language and actions - Staging methods used to present the character of Blanche Tennessee Williams was once quoted as saying "Symbols are nothing but the natural speech of drama...the purest language of plays". This is clearly evident in A Streetcar Named Desire, one of Williams's many plays. In analyzing the main character of the story, Blanche DuBois, it is crucial to use both the literal text as well as the symbols of the story to get a complete and thorough understanding of her. Before we can understand Blanche's character we must understand the reason why she moves to New Orleans and joins her sister, Stella, and brother-in-law, Stanley. By analyzing the symbolism in the first scene, one can understand what prompted Blanche to move. Her appearance in the first scene "suggests a moth". In literature a moth represents the soul. ...read more.

Ms. DuBois never told them about the promiscuous life she lived before she came. Stanley, on the other hand, persisted in trying to find out her true past throughout the story. Considering that this is Stanley's house, his domain, it is easy to see that this spells doom for Blanche. The difference between Blanche and Stanley would not be so bad if it were not for one of Blanche's flaws. This harmful trait is Blanche's inability to adapt to her surroundings. This is seen by noting a play on words used by Williams. In the first scene Blanche is described as "daintily dressed" and mentions that she is "incongruous to her setting". Blanche cannot adapt to her surroundings, but instead tries to change them. Later in the story she says "You saw it before I came. Well, look at it now! This room is almost-dainty!". By using the word dainty in both places Williams shows us how Blanche tries to change her surrounding to match her, instead of adapting to them. This will not work with Stanley. Blanche deceives everyone for a good portion of the play. However, Stanley is continually trying to find her true history. Blanche says "I don't want realism. ...read more.

This music is heard as she explains the suicide of her husband in scene six. It is also in the background when Stanley gives her a Greyhound ticket to go home (i.e. back to cemeteries) in scene eight. It also fades in and out of the scene where Mitch confronts Blanche about her true past. In studying the main character of A Streetcar Named Desire, Blanche DuBois, it is necessary to use both a literal translation of the text as well as interspersed symbolism to have a complete understanding of her. Tennessee Williams the author of the play wrote it this way on purpose. In fact he once said that "Art is made out of symbols the way the body is made out of vital tissue". "Williams still arouses sympathy for her despite her weaknesses". I agree with this statement wholeheartedly. As I have shown in my analyses of Blanche in certain situations, and also in her mannerisms and actions, her history, William's directions and how others treated her, the author has evoked a strong feeling of sympathy for Blanche. The impression left on me upon completing my reading of the play was one of pity and sorrow for her 'unsuccessful journey'. In my opinion, she is akin to the tragic heroes of Shakespearian writings in that she has flaws which prove to be her eventual, inevitable downfall. ...read more.