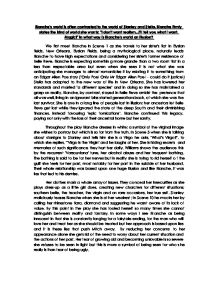 Blanche's world is often contrasted to the world of Stanley and Stella. Blanche firmly states the kind of world she wants: &quot;I don't want realism...I'll tell you what i want. Magic!&quot; In what way is Blanche's world an illusion?

Blanche's world is often contrasted to the world of Stanley and Stella. Blanche firmly states the kind of world she wants: "I don't want realism...I'll tell you what i want. Magic!" In what way is Blanche's world an illusion? We first meet Blanche in Scene 1 as she travels to her sister's flat in Elysian fields, New Orleans. Elysian Fields, being a mythological place, naturally leads Blanche to have high expectations and considering her sister's former residence of Belle Reve, Blanche is expecting something more grande than a two room flat in a less than respectable area but even when she sees it is not what she was anticipating she manages to almost romanticise it by relating it to something from an Edgar Allen Poe story ("Only Poe! Only Mr Edgar Allen Poe! - could do it justice!) Stella has adapted to the new way of life in New Orleans. ...read more.

Williams shows the audience this by the recurrent 'Varsouviana' tune, her alcohol abuse and her frequent bathing. The bathing is said to be for her nerves but in reality she is trying to rid herself of the guilt she feels for her past, most notably for her part in the suicide of her husband. Their whole relationship was based upon one huge illusion and like Blanche, it was lies that led to his demise. Her clothes mask a whole array of issues. They conceal her insecurities as she plays dress-up as a little girl does, creating new charcters for different situations; southern belle, the teacher, the virgin and on rare occasions, her true self. Stanley maliciously teases Blanche when she is at her weakest; in Scene 10 he mocks her by calling her rhinestone tiara, diamond and suggesting he wasnt aware of its lack of value. By this point in the play she has fooled herself so many times she cannot distinguish between reality and fantasy. ...read more.

Brick in 'Cat on a Hot Tin Roof uses alcohol as a way to feel closer to Skipper who's alcohol and drug abuse destroyed him after Margaret confronted him about his relationship with Brick, just as Blanche calling the boy when she was 16 "disgusting" . Williams also fell into drug and alcohol addiction, perhaps because he never got over the death of his first love, Kip. The use of lighting is critical to show Blanche's hatred of being exposed. To be seen would leave her vulnerable to scrutiny, something she could not stand ('I won't be looked at in this merciless glare'). Her white clothes are said to "suggest a moth"; she is delicate and drawn to the light but in doing so she is doomed to die. Originally Williams was going to call the play 'The Passion of a Moth'. In Scene 1 she says "Daylight never exposed so total a ruin!". She doesn't just mean her fading looks but that she as a whole has become a ruin. The use of colours is very important. ...read more.