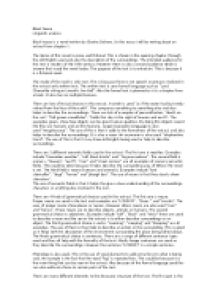 ﻿Bleak house Linguistic analyse Black house is a novel written by Charles Dickens. In this essay i will be writing about an extract from chapter 1. The Genre of this novel is prose and fictional. This is shown in the opening chapter through the old English used and also the description of the surroundings. The intended audience for this text is readers of the 19th century. However there is also a second audience which is anyone that reads the novel today. The purpose of the text is to entertain. This is because it is a fictional novel. The mode of the novel is only text. This is because there is not speech or pictures involved in the extract only written text. The written text is uses formal language such as "Lord Chancellor sitting in Lincoln's Inn Hall". Also the formal text is planned as it is a chapter from a book. ...read more.

There are 4 kinds of grammatical choices used in the extract. The first one is nouns. Proper nouns are used in the text and examples are "LONDON" , "Essex " and "Lincoln". The uses of proper nouns show places or names. However others nouns are also used "river" and "horses". These nouns are to describe objects, animals or humans. The second grammatical choice is adjectives. Examples include ?soft", "black" and "misty" these are used to describe a noun and the use in this extract is to either describe surroundings or an object. The third grammatical choice is verbs. "Looming", "creeping" and "drooping" are all examples. The use of them is they help to describe an action or the surrounding. This is good as it helps with the description of the environment surrounding the place being talked about. The finale grammatical choice is sentences. There are a range of different sentence types used and they all help with the formality of the text. ...read more.

This is because of the tone of voice used. Finally there is a continuous use of external coherence. This is because there is lots of reference to the real world and is really descriptive of the scenery. There is not much graphology used as there are not pictures or colours involved. However the fact that the word "LONDON" is in capitals it stands out from the text. Also the use of different size paragraphs and punctuation also shows graphology of the text in a different form. Pragmatics are used in this extract. "Losing their foot" is an example. This shows that people are falling over because it is so muddy and wet. A second example is?chance people on the bridges peeping over the parapets". This place is perhaps a tourist spot because local residents wouldn't be sight seeing. A final example is ?holds this day in the sight of heaven and earth". This perhaps is to do with religion. This is because "sight" could be a reference to god. In conclusion lots of linguistic terms are used and this helps readers to understand the text. ...read more.