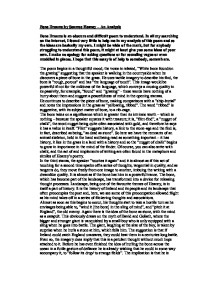 Bone Dreams by Seamus Heaney - An Analysis Bone Dreams is an obscure and difficult poem to understand. In all my searching on the internet, I found very little to help me in my analysis of this poem and so the ideas are basically my own. I might be wide of the mark, but for anybody struggling to understand this poem, it might at least give you some ideas of your own. I make no apology for asking questions or for sounding vague or even muddled in places. I hope that this essay is of help to somebody, somewhere. The poem begins in a thoughtful mood; the voice is relaxed, "White bone found/on the grazing" suggesting that the speaker is walking in the countryside when he discovers a piece of bone in the grass. He uses tactile imagery to describe his find, the bone is "rough, porous" and has "the language of touch". This image would be powerful if not for the mildness of the language, which conveys a musing quality in its passivity, for example, "found" and "grazing" - these words have nothing of a hurry about them and suggest a peacefulness of mind in the opening stanzas. He continues to describe the piece of bone, making comparisons with a "ship-burial" and notes the impressions in the grass as "yellowing, ribbed". ...read more.

This obviously draws on the myth of David and Goliath, where the bigger and stronger giant is vanquished by a small boy who is only equipped with a sling when he goes into battle. The giant, laughing at the size of the boy, is taken by surprise when he hurls a stone at him, which fells him. The suggestion is that if Ireland could catch England unawares, they could beat them in a centuries long battle. Even so, the imagery does imply that this is a petulant thought without much hope attached to it. Before he has even finished the idea of hurling the bone across the ocean in a futile gesture of defiance he is already wishing that he could in some way accompany it, to "follow its drop/ to strange fields". The implication is that he is thinking about England, the Irish/English situation, but before this develops, he moves into the second section of the poem and into a digression. He with a kenning, "Bone House", and then refers us to a definition of the phrase; "A skeleton", in old Norse; the language of the Vikings, those other invaders of Ireland. Curiously, his thoughts of the Viking invaders are benign in comparison to his thoughts on the English invaders, although this can easily be attributed to the continuing situation in Northern Ireland today. ...read more.

as being "a love nest in the grass", highly suggestive in itself of pubic hair and not dissimilar to the expression, "snake in the grass". The obvious s****l metaphor of the snake and the p***s should not, I believe, be discounted! Of course, there are layers of meaning here, as in almost everywhere in a Heaney poem, and so these lines might also suggest a bed or a pile of hay. The idea of the sneaky snake in the grass, too, could suggest the mixed pedigrees of both the English and Irish races, due to invasion. He then speaks tenderly of "holding my lady's head" and of turning himself into bone "by gazing" - which is when the poem begins to become obscure and difficult to fathom. The language is erotic, "my hands, on the sunken fosse of her spine" are highly suggestive of male hands caressing a woman's body in a s****l way. A fosse is a damp ditch or shallow moat, and so represents the female v****a. In which case, if the female part of the equation in the English/Irish argument is usually figured as Ireland, as disempowered and feminised, does he therefore imagine himself as "a chalk giant" spread out across the Irish landscape or is he envisaging himself as an invading male, with England as disempowered, in a kind of fantasy r**e? The chalk giants of the west of England are, after all, ancient fertility symbols, depicted with giagantic, e***t penises. ...read more.