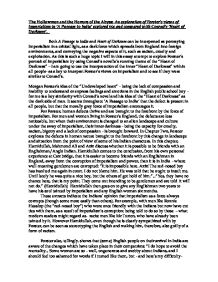 Both A Passage to India and Heart of Darkness can be interpreted as portraying Imperialism in a critical light, as a dark force which spreads from England into foreign environments

The Hollowmen and the Horrors of the Abyss: An exploration of Forster's views of Imperialism in 'A Passage to India' explored via and compared with Conrad's 'Heart of Darkness'. Both A Passage to India and Heart of Darkness can be interpreted as portraying Imperialism in a critical light, as a dark force which spreads from England into foreign environments, and conveying the negative aspects of it, such as r****m, cruelty and exploitation. As this is such a huge topic I will in this essay attempt to explore Forster's portrait of imperialism by using Conrad's novella's running theme of the "Heart of Darkness" - I am going to use the interpretation of the inner "Heart of Darkness" within all people- as a key to interpret Forster's views on imperialism and to see if they were similar to Conrad's. Morgan Forster's idea of the "Undeveloped heart" - being the lack of compassion and inability to understand or express feelings and emotions in the English public school boy - for me is a key similarity with Conrad's novel and his idea of the "Heart of Darkness" as the dark side of man. It seems throughout 'A Passage to India' that the defect is present in all people, but that the morally grey force of imperialism encourages it. For Forster, human defects thrive and are brought to the forefront by the force of imperialism. ...read more.

In this conversation with Aziz, she also indicates an awareness that Ronnie has changed since he arrived in India, but that these defects (or this 'darkness') was already present in his personality: Adela as an Englishwoman speaking about her own kind, is probably not (here) guilty of r****m, and may be seen to be a true key into the English mind. She is also one of the few English people in the novel who are self aware of the corruption that imperialism imposes. Adela can be paralleled to Kurtz in Conrad's novella, who like her is in some ways also aware of the power of imperialism and its negative effects, as well as the changes it forces upon those living under its influence. Kurtz was a bright ambitious man drawn to the Congo by imperialism's force, however unlike the Anglo-Indians such as Ronnie and Mr Turton, it can be interpreted he became aware of the negative effect imperialism was having upon him, and as a result his "soul [is] mad." For me Kurtz's dying words on his deathbed: "The Horror. The Horror." have great significance these final words are open to any number of interpretations, from meaning the horror of the things he has witnessed, to the horror of the Congo environment itself. ...read more.

Forster's sympathetic characterisation of the Indians makes the acts of r****m against them all the more sad, and by this he does paint, like Conrad, a brutal picture of Imperialism, through use of characters who have had their 'hearts of darkness' triggered by imperialism and make such shockingly r****t, not to mention patronising, remarks as "The kindest thing one can do to a native is to let it die" (Mrs Callendar). Forster also gets us to sympathise with English characters who do not look "dispassionately at the phenomenon of imperialism," such as Fielding (Indeed Fielding is believed by many to be Forster's representation of himself in the book). He through Fielding attempts to show the good in people, and like Conrad's Marlowe, but to a much greater extent, shows acts of compassion and liberal mindedness in Fielding: he is the first English professor to teach Indians in his university and has Indian friends such as Godbole, and becomes a friend to Aziz. However Forster makes it all too clear that Fielding is a on his own, a man swimming in a sea of racists, such as the Turtons and Callandars. The act which sets Fielding most apart from his fellow Englishmen is of course his support of Aziz in the Marabar affair; but even he shows his inner "heart of darkness" when he deserts Aziz at the train station and at the end of the trial. ?? ?? ?? ?? ...read more.

A very good essay which is fluently written and well structured. It is a huge topic and so is not exhaustive. There are some well selected critical voices and appropriate examples and quotes from the text are included. A conclusion is needed as the essay ends rather abruptly. The writer makes some intelligent and perceptive comments and clearly understands both writer's intentions. An intelligent and thoughtful response to a complex question.