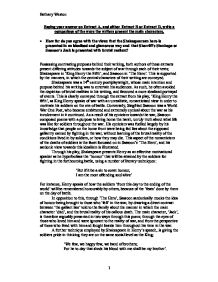 Both authors of these extracts present differing attitudes towards the subject of war through each of their texts; Shakespeare in 'King Henry the Fifth', and Sassoon in 'The Hero'. This is supported by the manners

Basing your answer on Extract A, and either Extract B or Extract D, write a comparison of the ways the writers present the main characters. * How far do you agree with the views that the Shakespearean hero is presented in an idealised and glamorous way and that Sherriff's Stanhope or Sassoon's Jack is presented with brutal realism? Possessing contrasting purposes behind their writing, both authors of these extracts present differing attitudes towards the subject of war through each of their texts; Shakespeare in 'King Henry the Fifth', and Sassoon in 'The Hero'. This is supported by the manners, in which the central characters of their writing are conveyed. Shakespeare was a 14th century poet/playwright, whose main intention and purpose behind his writing was to entertain his audiences. As such, he often avoided the depiction of brutal realities in his writing, and favoured a more idealised portrayal of events. This is clearly conveyed through the extract from his play, 'King Henry the fifth', as King Henry speaks of war with an unrealistic, romanticised view in order to motivate his soldiers on the eve of battle. ...read more.

The main character, 'Jack', is therefore arguably presented in two ways through this poem; through the eyes of those who loved him and were ignorant to the reality of war, and from the perspective of those who lived with him and fought beside him throughout his time in the war. A further technique employed by Shakespeare in Henry's speech, is giving the soldiers pride in thinking they are on the same social level as the King; 'We few, we happy few, we band of brothers; For he to-day that sheds his blood with me shall be my brother'. A third technique utilised by Shakespeare is turning a negative point around, so that soldiers don't fear it: Depicting his main character as having an immense faith in God, through Henry, Shakespeare idealises death, stating that 'if we are mark'd to die, we are enow/ to do our country loss', therefore communicating that if the soldiers die in battle, it is God's will, and therefore they should not fear it. ...read more.

As his aim was to convey the brutal reality of war to those who previously had been fed lies about the honourable manners in which soldiers 'fell', Sassoon illustrates an extremely sardonic, cynical view of war and how it can be idealised. Thus, he presents 'Jack' as a man who is merely fulfilling his duty, fighting in the war yet lacking passion to do so, as he constantly tried 'to get sent home'. Jack is illustrated as one of a thousand men who eventually dies a callous death, which none of those he fought with seem to regret. The only one who did 'car' it seems, was his mother, who knew nothing of the reality he faced. Shakespeare's objective was to entertain his audiences however, and such led him to present an extremely contrasting view from that of Sassoon, romanticising the act of fighting for one's country by hyperbolising the positive aspects, and evading the negative. Hence, Henry is presented as a patriotic man with the, seemingly na�ve compared with Sassoon's poem, idealised belief that fighting for one's country is a 'great honour', and that 'God's will' will serve them justly. ?? ?? ?? ?? Bethany Weston 1 ...read more.