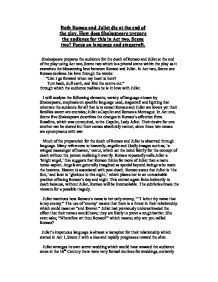 Both Romeo and Juliet die at the end of the play. How does Shakespeare prepare the audience for this in Act two, Scene two? Focus on language and stagecraft

Juliet mentions how Romeo's name is her only enemy, "'T is but thy name that is my enemy." The use of 'enemy' means that there is a threat in their relationship which could mean an "end forever." Juliet had previously underestimated the effect that their names would have; they are likely to prove a tough barrier. She even asks; "Wherefore art thou Romeo?" which means; why are you called Romeo? Juliet's impetuous language is almost a metaphor for their relationship which started in Act 1, Scene 5 with a kiss and rapidly progresses toward the altar. Juliet arranges he own secret wedding which would have amazed the audience since in the 16th Century there were very formal routines for weddings, certainly none organized by the bride and groom, but by the respective families or representatives. Shakespeare is attempting to involve the audience in making judgements about the naivety of the pair and their immaturity. ...read more.

Where Romeo calls Juliet a 'bright angel' and a 'winged messenger of heaven,' Juliet could be positions on a balcony higher than Romeo giving the audience the idea the idea that she is actually angelic. At the point the director may have a light shone upon her and/or Romeo may be faded out into the background giving more significance to Juliet as she is suppose to be elevated. To also represent this supremacy a radiant Juliet could be clothed in brilliant white. When Juliet worryingly suggests to the possibility of Romeo possibly being killed if the guards spot him, she may shed a few tears showing the affection, admiration and true love she has for him. The tears act as a metaphor of how she would feel if he were executed, therefore linking the scene with death. William Shakespeare's use of language and stage direction enables the audience to understand that for all the couples' obvious affection their ultimate end will not be romantic. Through his continual use of words associated with the angelic throng there is implicitly an insinuation that death abounds. By Gurpal Singh Liddar ...read more.