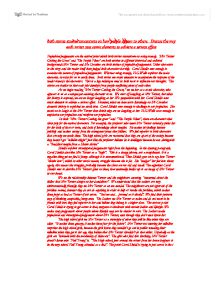 Both stories studied concentrate on how people appear to others. Discuss the way each writer uses comic elements to achieve a serious effect

Both stories studied concentrate on how people appear to others. Discuss the way each writer uses comic elements to achieve a serious effect Prejudicial judgements are the central point which both stories concentrate on using comedy. 'Mrs Turner Cutting the Grass' and 'The Purple Plieus' are both written in different historical and cultural backgrounds.Mrs Turner and Me Coombes are both victims of prejudicial judgements. Other characters in the story and the reader itself have judged both characters harshly. Carol Shields uses comedy to examine the nature of prejudicial judgements. Whereas using comedy, H.G.Wells explores the main character, in order for us to mock them. Both stories use comic elements to manipulate the response of the reader towards the characters. This is a key technique used in both texts to influence our thoughts. The stories are similar in that each plot develops from people conflicting views of each other. As we begin reading "Mrs Turner Cutting the Grass," we see her as a comic character, who appears to us as a unique yet amusing character to us. We start off laughing at Mrs Turner, but when her history is exposed, we are no longer laughing at her .We sympathise with her. Carol Shields uses comic elements to achieve a serious effect. However, when we have more knowledge on Mr Coombes domestic history is exploited we mock him. Carol Shields uses comedy to challenge to our prejudices. She wants us to laugh at the Mrs Turner then think why are we laughing at her. H.G.Wells uses comedy to emphasise our prejudices and reinforce our prejudices. In both "Mrs. Turner Cutting the grass" and "The Purple Pileus", there are characters that show pity for the central characters. For example, the professor who meets Mrs Turner certainly pities her for her lack of class or taste, and lack of knowledge about temples. He makes his feelings known publicly and makes money from the consequent poem that follows. ...read more.

Is that such a crime? She is not obsessed with living up to the standards the society has set-unlike the sachers. "Oh, what a sight is Mrs Turner cutting her grass and how like an ornament, she shines". The story ends exactly how it begins. Carol Shields refers to Mrs Turner as a "sight" right in the opening paragraph and calls her a "sight" in the closing paragraph. But at the end of the story we see the "sight" as a positive term, mainly because we know more about her background and history. "an ornament she shines" this is certainly praising her. As the reader finishes reading the story, some may even envy her, who at first felt superior then her, as mrs turner has done so much in life and experienced so much, that she realises that prejudicial judgements don't mean anything. Carol Shields achieves what she set out to do with the story, she wanted to expose our prejudices, and then wants us to think about why we are laughing at her, and why we reach to certain judgements about people. We also feel sorry for her, as she had been judged so harshly throughout her life. Nevertheless, there is more sympathy towards her then Mr Coombes. Mr Coombes is being laughed at, because of his actions and what he doesn't do, whereas Mrs Turner is being laughed at because she is ignorant of what people think of her. she has been ignorant of what people think of her. She has never fit into the society and has always been peculiar. One of the points Carol Shields emphasises at the end of the story is that all Mrs Turner has ever done is live her life to please her self. She is being laughed at because she does not show off, not because she "doesn't know". The point that she "doesn't know" is subjective. ...read more.

Alternatively, what we judge them to be. By using comedy the writers are successful in making the characters seem deceptive. "....enjoying both his cigarette and the prospect of an argument", when Clarence first has an encounter with Mr Coombes, he believes coombes is at a lower level than himself. This makes Clarence feel superior to him. In addition, in physical appearance Clarence is described as 'lank young man', the fact that he is taller then Coombes, makes Coombes feel at no-authority. However, after Coombes takes the drug and goes home, Clarence no longer feels at power, "Clarence approved himself a coward". After his little performance, we realise Coombes is a little hypocrite in the story. His wife has taken him seriously and gives Coombes the respect he believes he deserves. All the same, the reader still sees him as a slapstick comedian. At the end of the story, Coombes has an attempt at dignity. He lies to his brother so hes brother admires him for ewhat seems as Coombes' authority. "I was a bit too easy and loving", Coombes was more of a pushover than a loving husband, but hes too ashamed to say it to hes brother. He plays the sort of man, he wish he always has, even before the drug. "We 'ad a...pitched into them". Coombes is telling the truth, just not the whole truth. That's what makes it so humorous. " I dessay they're sent for some wise purpose", Coombes believes that pretending to be sexist makes him look like a real man with authority. Just like 'Mrs Turner Cutting the Grass'. Purple Plieus ends with the author using same sort of adjectives to describe the main character, but with an extra positive adjective. H/G/Wells describes Coombes as a 'little man' in the beginning, and then at the end calls him an 'absurd little man'. Absurd is the key word here. This is exactly what we think of Coombes at the end of the story. Just like we think Mrs Turner is an 'ornament'. ...read more.