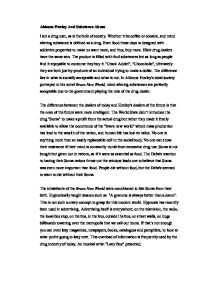 Aldeous Huxley And Substance Abuse I am a drug user, as is the bulk of society. Whether it be coffee or cocaine, any mind altering substance is defined as a drug. Even food these days is designed with addictive properties to make us want more, and thus, buy more. Illicit drug dealers have the same aim. The product is filled with foul substances but as long as people find it enjoyable to consume they buy it. "Crack Addict", "Chocoholic", ultimately they are both just by-products of an individual trying to make a dollar. The difference lies in what is socially acceptable and what is not. In Aldeous Huxley's ideal society portrayed in his novel Brave New World, mind-altering substances are perfectly acceptable due to the government playing the role of the drug dealer. The difference between the dealers of today and Huxley's dealers of the future is that the ones of the future were more intelligent. The World State didn't introduce the drug "Soma" to make a profit from the actual drug but rather they made it freely available to allow the occurrence of the "brave new world" where mass production has lead to the wealth of the nation, and human life has lost its value. ...read more.

Oh my god, I have this, write this down! Whatever this is, I have this! Half the time you don't even know what the commercial is, there's people running through fields, or flying kites, or swimming in the ocean. Like, that is the greatest disease ever! How do you get that? That disease comes with a hot chick and a puppy!" Oh the appeal of sickness! In the "Savage Reservation" Linda drank excessive Mescal because she was in denial of that world, despite the sickness it created she always went back for more because she enjoyed consuming it. Then upon her arrival to the World State she ironically couldn't handle it their either and went on Soma holiday. Her socially acceptable escape inevitably lead to her demise. It's worthy of note that Huxley left this world in similar fashion, famously taking 100 micrograms of Lysergic Acid Diethylamide (LSD) on his deathbed. To emphasise my point I'll write a story that I concocted; There once was a boy playing football with his sister when he spied a blue moose, It was a peculiar moose, not like any moose he had seen before. ...read more.

Opiates are dominantly used for pain relief and to induce a state of calmness. Is this what religion is used for? I believe the answer to that would depend on the individual. Despite this modern worlds conditioning and discrimination against difference no two persons are identical and what one truly believes in is dependant on the individual. As for Huxely's comment on the substitute for god being Soma; the truth behind the statement is evident in our own "brave new world". Soma is a fictional substance and although it represents a drug in the story is could be used as a metaphor for a lot more. Money is just as addictive as the hardest methamphetamine. With the onset the Great Depression bankers jumped from the windows of their skyscrapers, I suppose that would be a side effect of greed and the dependence on materialist happiness. It's ironic that the building their happiness was built from was also used for their suicide. So ultimately, the consumerism of substance abuse leads to more than the demise of the individual. It was the consumers' money that funded the World State; it's our money that fuels the drug industry. This then backfires as we form a dependence on whatever they fed us. ...read more.