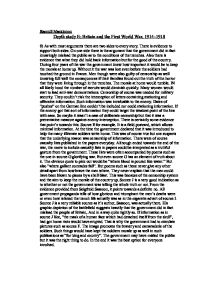 Raonull Mackinnon Depth study E: Britain and the First World War, 1914-1918 8) As with most arguments there are two sides to every story. There is evidence to support both sides. On one side there is the argument that the government did in fact knowingly mislead the public as to the conditions of the trenches. Also there is evidence that what they did hold back information but for the good of the country. During four years of the war the government knew how important it would be to keep the morale at home up. Without it the war was lost even before the soldiers had touched the ground in France. Men though were also guilty of censorship as well knowing full well the consequences if their families found out the truth of the horror that they were living through in the trenches. The morale at home would tumble. IN all likely hood the number of recruits would diminish quickly. ...read more.

Source J is a very good indication as to whether or not the government was telling the whole truth or not. From the evidence provided from Seigfreid Sassoon, it points towards a definite no. All government propaganda tells of how glorious and triumphant the men's deaths were or even how relaxed the trench life actually was as in the cigarette advert of source I. Source J is a very reliable source as it's author, Sassoon, was actually there. His graphic depiction of the battlefield suggests heavily that the government did in fact mislead the people of Britain, And in a way quite rightly so. If information as in source J like, "the mask of a human face which had detached itself from the skull", had got home riots would have erupted. That is why the government had to circulate pictures such as source F. The image promotes the bravery and camaraderie of the soldiers. Such things would have kept the soldiers morale up as well in such publications as "for king and country". ...read more.

People needed to be encouraged to work not depressed by the reality of a war that had finished. As always it depends on the origin of the piece. Source H for example is a first hand account of the battle of the Somme. It is first hand because he was actually there. Sixty years later he has given an extremely detailed piece of writing of how his experience at the battle of the Somme. An historian on the other hand was more than likely never they're relying only on the scraps of information being fed to him/her. Writing much later such as sources H and J are affected by hindsight. In 1918 emotions would still have been running high and in winning the war the historian may have been wearing rose tinted glasses. An historian writing much later would have more access to the facts of the event being covered. History reflects the time in which it is written. An historian writing in the aftermath of the first world war would give a very different view to a historian writing much later. ...read more.