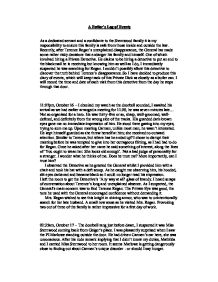 A Butler's Log of Events As a dedicated servant and a confidante to the Sternwood family it is my responsibility to ensure this family is safe from those inside and outside the law. Recently, after Terence Regan's unexplained disappearance, the General has made some rather risky decisions that endanger his family and himself. One of which involved hiring a Private Detective. He claims to be hiring a detective to put an end to the blackmail he is receiving but knowing him as well as I do, I immediately suspected he was searching for Regan. I couldn't possibly allow this detective to discover the truth behind Terence's disappearance. So I have decided to produce this diary of events, which will keep track of this Private d**k as closely as a butler can. I will record the time and date of each visit from this detective from the day he steps through that door. 11:07pm, October 16 - I checked my watch as the doorbell sounded, I awaited his arrival as we had earlier arranged a meeting for 11.00, he was seven minutes late... ...read more.

As he caught me observing him, his hooded, slit eyes darkened and became blank so I could no longer read his expression. I left the room to get the Detective's 'Any way at all' glass of brandy. I heard scraps of conversation about Terence's long and unexplained absence. As I suspected, the General's main concern was to find Terence Regan. The Private Eye was good, the tone he used with the General encouraged confidence without demanding it. Mrs. Regan wished to see this knight in shining armor, who was to unintentionally search for her late husband. A small row arose as he visited Mrs. Regan. Provoking two out of three of the family is rather impressive for a first day of work. 02:35am, October 17 - The doorbell rang just before dawn, I suspected it was Miss Sternwood coming back from Geiger's place. I was pleasantly surprised when I saw the PI Marlowe standing outside the door. He had driven Carmen's car here, she was unconscious. ...read more.

This was a perfect time and place for all the tracks to be covered. 18:00pm, October 20 - I followed Marlowe as he led Carmen to the old well, where she murdered Terence Regan. Marlowe's expression was unsmiling and grave, after all; he was dealing with death. I watched closely as Marlowe suddenly handed her the gun, she began to have a fit, I saw Carmen raise the gun and pull the trigger, yet no shots fired. I underestimated Marlowe. He caught her as she fell unconscious. Marlowe stood there for a moment gazing at her in his arms with the stance of a victorious gladiator. My fate now rests upon the hands of a detective who might just want what I do - the safety of The Sternwood family. Marlowe figured out what had happened to Regan and what was going to happen to himself; he had tricked her with an empty gun. The Detective insisted that Carmen is given the help she needs by having psychiatric therapy. Of course, I'll have to ensure that General Sternwood is kept out of the loop, even though he's so close to the Big Sleep. Word Count - 889 ?? ?? ?? ?? ...read more.