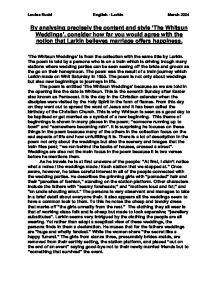 By analysing precisely the content and style 'The Whitsun Weddings', consider how far you would agree with the notion that Larkin believes marriage offers happiness.

By analysing precisely the content and style 'The Whitsun Weddings', consider how far you would agree with the notion that Larkin believes marriage offers happiness. 'The Whitsun Weddings' is from the collection with the same title by Larkin. The poem is told by a persona who is on a train which is driving trough many stations where wedding parties can be seen seeing off the bride and groom as the go on their honeymoon. The poem was the result of a train journey which Larkin made on Whit Saturday in 1955. The poem is not only about weddings but also new beginnings to journeys in life. The poem is entitled 'The Whitsun Weddings' because as we are told in the opening line the date is Whitsun. This is the seventh Sunday after Easter also known as Pentecost. It is the day in the Christian calendar when the disciples were visited by the Holy Spirit in the form of flames. From this day on they went out to spread the word of Jesus and it has been called the birthday of the Christian Church. ...read more.

Other characters include the fathers with "seamy foreheads;" and "mothers loud and fat;" and "an uncle shouting s**t." The persona is very observant and manages to take in a brief detail about everyone their. It also appears all the weddings seem to have a common look to them. To this he notes the cheap and tawdry dress that marks off "the girls unreally from the rest." The clothing they all wear is that of working class folk and is cheap but made to look expensive; "jewellery substitutes". Larkin seems very intrigued by the clothing the people are all wearing. Yet rather than adopt a sceptical view of these weddings, the persona finds in them a declaration. He muses that for the fathers weddings are "huge and wholly farcical." While the women share "the secret like a happy funeral." The girls from stanza three, presumably brides-maids, are removed from their earthly setting, the station platform, and placed "out on the end of an event" saying good-bye not to their newly married friends but to "something that survived" the event. ...read more.

The poem ends with a visionary moment; "We slowed again, And as the tightened brakes took hold, there swelled A sense of falling, like an arrow-shower Sent out of sight, somewhere becoming rain." The poem is ironic because it ends with a beginning. It seems incomplete. The shower of arrows mentioned could represent Cupid's arrows which would show Larkin believes you can be struck by love. It is possible he wishes he had been struck by one of Cupid's arrows. The poem also finishes with the end of the journey for the train as they arrive at their destination. Larkin believes that marriage does bring happiness in some respect as long as the person you marry you truly love. He also seems to have a view that marriage can be a big show and maybe fake in some cases. It is not possible to completely determine Larkin's view on marriage because he does not expressly give it. He was not a Christian but he did write a few religious poems like 'Water' which is a view on making his own religion and 'church Going'. This is significant because he is talking about a Christian holiday. Louise Rudd English - Larkin March 2004 ...read more.