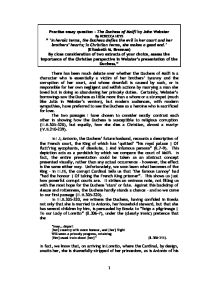 By close consideration of two extracts of your choice, assess the importance of the Christian perspective in Webster&amp;#146;s presentation of the Duchess

Practise essay question - The Duchess of Malfi by John Webster By REBECCA HEYS " 'In heroic terms, the Duchess defies the evil in her court and her brothers' hearts; in Christian terms, she makes a good end.' (Elizabeth M. Brennan) By close consideration of two extracts of your choice, assess the importance of the Christian perspective in Webster's presentation of the Duchess." There has been much debate over whether the Duchess of Malfi is a character who is essentially a victim of her brothers' tyranny and the corruption of her court, and whose downfall is caused by such, or is responsible for her own negligent and selfish actions by marrying a man she loved but in doing so abandoning her princely duties. Certainly, Webster's borrowings saw the Duchess as little more than a whore or a strumpet (much like Julia in Webster's version), but modern audiences, with modern sympathies, have preferred to see the Duchess as a heroine who is sacrificed for love. The two passages I have chosen to consider neatly contrast each other in showing how the Duchess is susceptible to religious corruption (III.ii.305-320), but equally, how she dies a Christian, almost a martyr (IV.ii.210-239). ...read more.

While it may have been established that the Duchess doesn't really defy the evil in her court and her brothers' hearts, it is more possibly that 'she makes a good end'. These are separate things - it is possible to fulfil one, but not the other - and evidence for the truth of the latter statement can be found in the second passage, IV.ii.210-239. IV.ii.210-239 is the Duchess's death scene. It begins with Bosola presenting the Duchess with her executioners and ends with the Duchess being strangled (though it appears from ll.350-4, not quite dying yet). Here, the Duchess, already resigned to death, accepts it in a noble and respectable way. Though this may seem like a contradiction in terms, despair (her resignation) being the ultimate Christian sin, the Duchess does not wish to commit suicide in this scene - she just wishes to accept the inevitable death which is being dealt her by others. The critic John Burnside says: "It is tempting to despair; not surprisingly, for despair and hope are inseparable companions, like beauty and ugliness, good and bad, cold and hot." ...read more.

of Malfi does not 'in heroic terms, defy the evil in her court and her brothers' hearts'; but perhaps she does 'in Christian terms, make a good end.' (Elizabeth M. Brennan) The importance of the Christian perspective is undoubtedly important for Webster - though he takes issue with the Church authorities, such as the Cardinal, and their hold over the state, he never the less sympathises with everyday, ordinary Christians, such as the Duchess, and Antonio, who are very much victims of the abuses of those 'Christians' above them. By close consideration of two contrasting extracts, this is shown in the way in which Webster presents the Duchess character - as well-meaning, but not infallible; as trying, perhaps failing, but as Christian never the less - possibly even interpreted as dying a martyr's death, killed because she was not strong enough to understand the traps and snares of Bosola and all he stood for. 1 978 words 1 Introduction, page ix, The Sea, The Sea by Iris Murdoch, published 1999 by Vintage. 2 Introduction, page xvi, The Duchess Malfi edited by John and Claire Saunders, published by Longman Study Texts (1987) 3 as above except page xxvii. ?? ?? ?? ?? 1 ...read more.