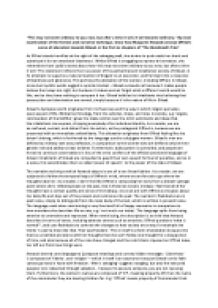 By close examination of the themes and narrative technique, show how Margaret Atwood conveys Offreds sense of alienation towards Gilead, in the first six chapters of The Handmaids Tale

﻿?This may not seem ordinary to you now, but after a time it will. It will become ordinary.? By close examination of the themes and narrative technique, show how Margaret Atwood conveys Offred?s sense of alienation towards Gilead, in the first six chapters of ?The Handmaid?s Tale? As Offred stands horrified at the sight of the salvaging wall, she strains to push aside her shock and substitute it for an emotional ?blankness?. Whilst Offred is struggling to repress this emotion, she remembers Aunt Lydia?s words about how ?this may not seem ordinary to you now, but after a time it will.? This statement reflects the true power of the patriarchal and totalitarian society of Gilead, in its attempts to suppress a natural reaction of disgust to an execution, and forcing it into a response of blankness and ignorance. This portrays the alienation of the women, including Offred, in Gilead, since Aunt Lydia?s words suggest a cynical mindset ? Gilead succeeds not because it makes people believe their ways are right, but because it makes women forget what a different world would be like, and so they have nothing to compare it too. Gilead belittles its inhabitants into believing that persecution and domination are normal, simply because it?s the nature of life in Gilead. ...read more.

?Men?s salvaging? suggests ravaging, but also the executed peoples? sins redeemed through salvation... however to execute someone, you are not rescuing them. Furthermore, the women?s names are composed of ?Of?, meaning property off, then the name of the commander they are bearing children for. E.g: ?Offred? means property of Commander Fred. Every time the women hear their names, they are reminded that they are nothing more than a piece of property, which adds to this feeling of not belonging. Offred states that she ?would like to believe this is a story? she?s telling. This interior monologue suggests that Offred is not recounting events from afar and looking back on an early period in her life, in actuality, she is describing the horror of Gilead as she sees it day to day. This quote shows the connection between her readers, her lost family, and her inner state. In Offred?s act of telling a story, she feels like she is rebelling against Gilead?s society since it seeks to silence and pacify women, whereas if she speaks out, even if only to an imaginary reader, God, or Luke, she is defying the rules. Gilead may deny women any control over their lives, but in creating a story, Offred feels it ?gives her control of the ending?. ...read more.

This creates a sense of alienation because Offred is without her child, and without the family she once hand. The tone of the chapters is dark and often melancholic for the past which Offred has left behind. As a reader I feel that Offred finds refuge in her alone thoughts, but she also finds pain in her memories. A sense of fear and paranoia is evident, probably because Gilead is run by a vicious totalitarian government. Alienation also comes from women being defined by traditional roles ? they have a function to breed, no identity, expression or name, and they are not free thinking (e.g: they have accepted greetings and farewells). A source of alienation also comes from Offred as an individual, which is all in her mind with no actions. Her tone is sardonic and mocking, and she refers to outsiders as ?them? and ?they? ? they are strangers, not her. No one is like her. Lastly, Offred?s alienation also divulges from the existence of her experience before the regime of Gilead ? the flashbacks show this. In conclusion, Atwood successfully conveys Offred?s alienation and subjugation from Gilead itself using many techniques and themes, namely the deviation from the linear narrative structure, because this provides the flashbacks and the source of much alienation. Sasha Groves ...read more.