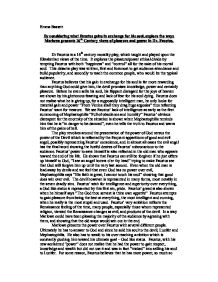 By considering what Faustus gains in exchange for his soul, explore the ways Marlowe presents 16th Century views of pleasure and power in Dr. Faustus.

Emma Bassett By considering what Faustus gains in exchange for his soul, explore the ways Marlowe presents 16th Century views of pleasure and power in Dr. Faustus. Dr Faustus is a 16th century morality play, which taught and played upon the Elizabethan views of the time. It explores the pleasure/power ethical divide by tempting Faustus with both "happiness" and "control" all for the sake of his mortal soul. This didactic play was written, first and foremost to get audience attendance and build popularity, and secondly to teach the common people, who would be the typical audience. Faustus believes that his gain in exchange for his soul is far more rewarding than anything God could give him, the devil promises knowledge, power and certainly pleasure. Before he even sells his soul, his flippant disregard for the joys of heaven are shown by his gluttonous feasting and lack of fear for his soul dying. Faustus does not realise what he is giving up, for a supposedly intelligent man, he only looks for material gain and power "From Venice shall they drag huge argosies" thus reflecting Faustus' want for treasure. ...read more.

Faustus' greed is also shown when he himself says "The God thou servest is thine own appetite" Faustus attempts to gain pleasure from being the best at everything, the most intelligent and cunning, when he really is the most stupid and used. Faustus' very ambition reflects the Renaissance feeling of the time, many people, especially those whom represented religion, viewed the Renaissance changes as evil, and products of the devil. In a way Marlowe could have been pleasing the majority of the audience by agreeing with them, and showing that the old ways would win out in the end. Marlowe presents the power over Faustus with several different people. Ultimately he has to answer to God and since he sold his soul to the devil, Lucifer and Mephastophilis. He also has to weald to his over reaching ambition which is constantly pushing him toward his ultimate goal - God like status. Faustus, with his new acclaimed "power" does not realise that he had the power to gain respect, knowledge and wealth but did not use it and was in fact "tricked" into selling his soul to Lucifer. ...read more.

His first soliloquy seems to hark back to his intellectual curiosity, but this is overweighed by his belief in superiority over Mephastophilis, both in power and intelligence. The Renaissance itself over promoted the role of the individual, at least that is how Marlowe portrays it with the conflicting master/servant roles. Some, if not all the pleasures Faustus experiences are but illusions, just like his power, he always possessed it, but never used it. This is ironic, knowing that Faustus, in the end, rejects the greatest pleasure of all, eternal bliss. The reflections of the Renaissance mind are shown by Faustus in his first speech of doubt over his decision "Now go not backward". The fatal flaw to the Renaissance mind is that of arrogance. What Faustus gains in exchange for his most important possession is virtually nothing. All the knowledge he wanted, he already had, all the power he could realistically get was all attainable, all the respect he wanted, he was on the way to getting. Marlowe was writing the play specifically to tailor to the 16th century audience, the humour and moral points are highlighted by Faustus greed and arrogance, and eventual loss of everything. ...read more.